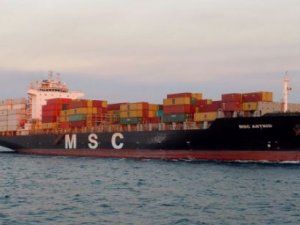 Based on 2019 data from the EU Monitoring, Reporting and Verification (MRV) scheme, T&E concluded that MSC's annual carbon emissions came in at about 10.7 million tonnes - edging out budget air carrier RyanAir and two coal-fired power plants, one in Poland and one in Germany. All of the others on the top ten were power stations. (As it does every year, Poland's giant Be?chatów Power Station topped the list by a wide margin.)

“Power and other sectors are cutting their emissions year in year out in response to EU regulations, but shipping pollution is left untouched. We can’t be at the mercy of global trade trends to tame maritime pollution. [EU] MEPs should vote for a system that finally makes ships pay for their emissions and re-invests the money in cleaner boats," said Faïg Abbasov, shipping manager at T&E, in a statement Monday.

The last time that T&E ranked MSC's emissions, it came in at eighth place, and it earned an objection from the Switzerland-based operator. “MSC transports 21 million containers annually and the ratio of CO2 emissions per ton of cargo we move is among the lowest in the industry,” the firm said in a response last year.

European Commission president Ursula von der Leyen's "European Green Deal" proposal, unveiled last December, would incorporate emissions from shipping in the EU Emissions Trading Scheme (ETS). The concept is up for a key vote in the European Parliament this week. Shipping's leading industry associations have advocated against this path, favoring IMO regulation instead.

“The EU carbon market will raise much needed funds for greener shipping technology, but that’s not enough to clean up the sector. It needs to be done in tandem with CO2 standards that require ships to operate more efficiently and use green hydrogen," said Abbasov.

This news is a total 1989 time has been read
Tags: Report: MSC Ranks Seventh on List of Europe's Largest CO2 Emitters Mauritius Denies Bail to Wakashio’s CaptainMauritius rejected an application for bail made by Sunil Kumar Nandeshwar, the captain of the MV Wakashio that sunk off its southeastern coast in July.

Report: Saudi Arabia warns of an oil slick near Yemen’s decaying tankerAn oil spot has been identified some 50 km west of the Safer oil tanker moored off the western coast of Yemen, Reuters reported citing a letter from Saudi Arabia to the UN Security Council.