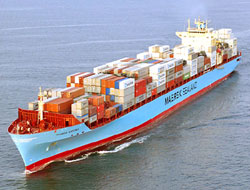 The Danish line is planning to re-route five out of 15 services currently transiting the Suez Canal. It has already diverted its AE7 loop that deploys the largest ships in its fleet.

The AE7 service was originally to be re-routed for just six eastbound sailings, but Maersk now expects to send ships around Africa on a permanent basis, and in both directions.

Morten Engelstoft, chief operating officer for Maersk, was quoted saying that the savings ''are very significant'' and it is ''not small money we are talking about.''

Engelstoft added that the meeting with the Egyptian officials was ''constructive'' and said they hoped to find ''a good solution that is beneficial for both parties''.

''We expect they will look at the current tolls, based on the situation that both we and other carriers have indicated,'' he was reported saying.

The longer voyage around Africa takes an extra week each way, but due to a fall in bunker prices from a peak of more than $700 per metric tonne (pmt) last year to current levels of around $250 pmt, operating costs are much lower than the Suez Canal transit.

A Suez transit reportedly costs around $700,000 for the world"s largest containerships.

Engelstoft did not disclose the exact cost savings from the Cape of Good hope route, but he said the sums involved were so large that Maersk wanted to take advantage of the cheaper voyage costs as soon as possible.

The average monthly bunker prices for 380 centistoke (cst) at key global bunkering ports have not touched $300 pmt since November last year. Bunker fuel prices have tracked the plunge in crude oil prices from more than $140 per barrel in July last year to $40-41 per barrel in recent weeks.

This news is a total 1631 time has been read