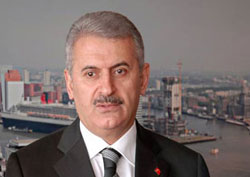 New stimulus package that aims to turn things around will soon be introduced to Turkey's shipbuilding industry.

New stimulus package that aims to turn things around will soon be introduced to Turkey's shipbuilding industry.

Turkey's shipbuilding industry, which has grown exponentially in the last six years with orders coming in from around the world, has sustained heavy damage from a drop in global demand, but a new stimulus package that aims to turn things around will soon be introduced. Transportation Minister Binali Y?ld?r?m said the rescue package, which is full of measures to address the problems faced by shipbuilders, will be finalized in 10 to 15 days.

Speaking to the Anatolia news agency, the minister said preliminary discussions on the content of this package took place during the most recent Economy Coordination Board (EKK) meeting last month, when the problems of other major sectors were also discussed.

Y?ld?r?m said a working group, including officials from the Treasury Undersecretariat, Finance Ministry and the State Planning Organization (DPT), was formed after the EKK meeting to prepare a comprehensive report on what can be done to support ailing companies in the ship construction business. "This working group will submit their report to us, and we will bring it before the EKK, which will have the last say on the content, composition and application of the measures," he noted.

At the time he was appointed as transportation minister in 2003, Turkey had 37 shipyards and 5,000 workers in the sector, Y?ld?r?m recalled, comparing these figures with those from the middle of last year, when the crisis began to affect the economy. In the first sixth months of 2008, there were 150 shipbuilding docks along Turkey's shores, employing 36,000 workers. Nearly 9,000 people lost their jobs during the following seven months.

The minister noted that the primary objective of the package would be to help ensure that orders that have already been received are fulfilled. "To do this, first we will offer a measure to expedite the process of receiving corporate loans from banks," the minister stated. He went on to describe other possible measures to be included in the package, saying: Secondly, there is the possibility of Eximbank extending loans for the construction of ships that will be sold to foreigners, as exports. Shipyard owners have already applied to us seeking to be able to benefit Eximbank loans, and they will be given an affirmative answer. Thirdly, the public sector will be encouraged to submit its ship orders to local manufacturers. In addition to this, there is the insurance matter. The state will probably be the financial guarantor for companies in trouble." Y?ld?r?m noted that the EKK will decide which of these measures to prioritize, which of them to implement and which are unsuitable depending on the working group's report.

"We haven't left any troubled sector on its own and have always held their hands to support them. Similarly, we will continue to stand by the strategic business of shipbuilding, which has a 15 percent share of the gross domestic product [GDP] and importantly serves to supply many of Turkey's needs," he said.

This news is a total 7679 time has been read