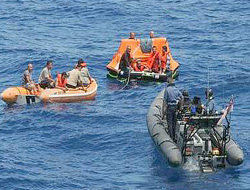 The Plymouth-based warship HMS MONTROSE yesterday rescued 11 Turkish seamen who were found drifting helplessly in two small boats after their ship sank beneath them two days ago.

The Plymouth-based warship HMS MONTROSE yesterday rescued 11 Turkish seamen who were found drifting helplessly in two small boats after their ship sank beneath them two days ago.

HMS MONTROSE on transit across the Mediterranean whilst conducting maritime security operations, found the desperate sailors without food and water after the sinking of their vessel the MV Sunshine.

The Panamanian flagged vessel was on route from Trapani in Sicily to Port Said in Egypt with a cargo of marble. The master reported that the ship sank at 5pm in high seas on Sunday. The ship rolled 90 degrees and within 10 minutes it had sunk with all crew surviving. The master of the Turkish ship said they ran out of provisions yesterday.

HMS MONTROSE’s ship’s company reacted quickly to the incident and put all their excellent training to good effect. The ship’s smaller sea boat was launched to rescue the survivors.

All the Turkish sailors were in pretty good condition, however they were quite traumatised by the ordeal and very hungry and wet.

Following a medical check by the ship’s doctor from HMS MONTROSE the survivors were given food and drink and a set of clean clothes. Temporary camp beds were provided on board the frigate for the transit to the Turkish naval ship TCG Gokceada for a 9pm transfer on board this evening. On completion of the transfer the survivors will be taken to the Turkish naval base at Aksaz near Marmaris.

Commander Tony Watt, HMS MONTROSE’s commanding officer, said: “The crew of MV Sunshine have been through a harrowing ordeal. I am just pleased I was able to carry out my most basic of duties, saving the lives of fellow mariners in distress. I am also delighted by the way my ship’s company responded, showing the flexibility and professionalism expected of the Royal Navy to undertake this text book rescue at sea.”

The ship’s rescue skills come from weeks of intensive training with the Flag Officer Sea Training Organisation in HM Naval Base Devonport. The ships are put through challenging scenarios encompassing many potential tasks, ranging from humanitarian rescues to conflict.

HMS MONTROSE is currently the UK contribution to the Standing NATO Maritime Group Two. The group is a permanently activated multinational NATO maritime force, created as a high readiness group, mobile and flexible across the broad spectrum of missions from peace to conflict. The ships are also part of the maritime component of the NATO Response Force under the Command of the Allied Maritime Component of Naples.

This news is a total 1613 time has been read