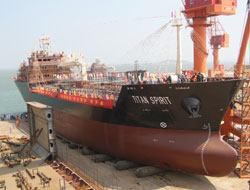 The firm said Mr Chu had left to pursue ?his own career development?. Mr Fruergaard, who was previously Titan executive director, after joining the company from AP Moller Singapore in 2005, had resigned ?due to his other business commitments?.

The firm, which owns a fleet of very large crude carriers, oil storage facilities along the China coast and the Titan Quanzhou Shipyard near Xiamen, has seen its share price slump in the last 12 months from around HK$0.55 cents on December 3 last year to HK$0.11 today.

In August the company posted an interim net loss of HK$291.6m ($37.6m) as a result of losses at its oil trading division, which it has tried to sell since around the middle of this year.

This news is a total 953 time has been read