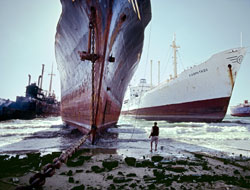 One of the two ships at the centre of the toxic ship-scrapping furore in the US has sailed away from the country, with Brazil as its intended destination.

A meeting at the US Environmental Protection Agency was addressing the latest developments, including the Anders" departure with a full statement expected later in the day.

She provided a copy of a letter sent to the new owner, Star Maritime, on July 31 in which the EPA admitted the possibility that the two ships might contain regulated quantities of polychlorinated biphenyls (PCBs) based on their age and findings from ?other vessels of similar vintage?.

However, the letter leaves the onus clearly on Star, concluding that ?if the vessels are determined to contain regulated quantities of PCBs, use or export for disposal, including dismantling, would be a violation of the US Toxic Substances Control Act?.

Ms White said on Thursday: ?The letter is to remind the owner of what the TSCA demands of them, so the owner understands this obligation.?

Star has stressed that it would trade the two ships, not scrap them.

The developments came as ecological group Basel Action Network made public details of its contact with the EPA, in which the agency"s Frank McAlister said presence of PCBs was ?unlikely?.

BAN executive director Jim Puckett dismissed this assurance, and reiterated BAN"s belief that the Anders and its sistership Bonny were headed for scrapyards in India or Bangladesh.

Mr Puckett said: ?This is really shocking. All through the Bush administration the EPA took action every time we warned them of a pending TSCA violation, and their record of enforcement was strong.

?Now we elected an environmental president and this administration, for the first time in 10 years, is willing to ignore the law and dump toxic waste on developing countries.?

According to AIS data from Lloyd"s Marine Intelligence Unit, the Anders ? a 1979-built, 21,050 dwt ro-ro now reflagged from the US to St Kitts & Nevis ? sailed from Norfolk on Wednesday with Santos as the reported destination.

Star Maritime earlier in the week suggested that the ship would be pressed into trades related to sugar. Following a failure of this year"s sugar crop, India is reported to be in dire need of sugar imports.

The furore surrounding the Anders and Bonny has trained the spotlight on the practice of reflagging US commercial ships that may have PCBs so they can be scrapped abroad, but within the confines of a tacit "don"t ask-don"t tell" approach.

The departure of the newly renamed and reflagged Anders came as the EPA declared there was ?low likelihood? the ship had unacceptable levels of PCBs, which would establish a contravention of US law.

Ms White said that this conclusion was based on information the agency had to date. Nevertheless, Ms White stressed that the onus of complying with anti-toxic laws rested with the new shipowner.

This news is a total 1329 time has been read