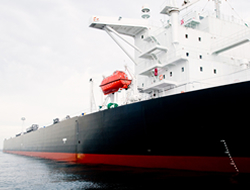 Canada must be better prepared to respond to major oil spills if more crude starts to flow in pipelines to the countrys Pacific Coast, a government panel said on Tuesday, as fears of a major marine disaster grow.

The report, by the federal transport department, makes 45 recommendations, including ensuring companies are prepared for a worst-case scenario and new guarantees that taxpayers will not be liable for costs related to spills in Canadian waters.

Regulators are currently weighing separate proposals from Enbridge and Kinder Morgan to build new pipelines to carry oil from Alberta to the British Columbia coast, which could bring an additional 600 tankers to the region each year.

The review of Canada’s ship-source oil spill regime is a key part of the federal government’s push to reassure Canadians that it has prepared for that additional traffic and has a policy in place to respond if there is a major spill.

Under current rules, a polluter is required to pay for the entire cost of a clean-up and there are funds set aside to compensate those affected by pollution damage from a maritime accident, though there is a cap on damages per incident.

The report, which was prepared for Transport Canada by a panel of independent experts, recommended that the cap be abolished and also said that an emergency account, funded by industry, should be created to pay when Canada’s Coast Guard is called in to lead a clean-up mission. “Canadian taxpayers should not bear any liability for spills in Canadian waters,” said the report, the first major review of Canada’s spill response plan in nearly 20 years.

It also urged more flexibility in response techniques and recommended that spill response be managed on a regional basis, ensuring that procedures are tailor-made for different geographies and environments. Canada is the world’s sixth-largest producer of crude oil, the vast majority of which is exported to the United States, and output continues to increase.

But congestion on existing pipelines means that crude is getting bottlenecked in landlocked Alberta, spurring the Alberta and federal governments to push for a new pipeline to the West Coast to open up export markets in Asia.

“If Canadians are to benefit from this resource potential, market diversification is essential and that means moving our resources to tide waters and onto tankers to transport them to an energy hungry world,” Joe Oliver, minister of natural resources, said at a press conference.

Efforts to build a pipeline through British Columbia have been fiercely opposed by First Nations aboriginal peoples and environmentalists, who say a spill near water or in the ocean would be devastating.

Transportation Minister Lisa Raitt said the government has already taken steps to better monitor ships moving through Canadian waters and would take all necessary actions to avoid any oil spills in the first place.

“We will make sure that the apparatus is there to help clean them up, should they have happen, and we will ensure that polluters pay,” she told reporters. Still, critics noted that while the report made 45 clear recommendations, the government had not yet committed to put any of them in place.

“It’s laughable, it’s a joke,” Spencer Chandra Herbert, the provincial NDP environment critic, told reporters outside the press conference. “The government is just trying to facilitate the Enbridge Northern Gateway pipeline and other oil pipelines through B.C.” The report was critical of existing response time standards, suggesting that a timely response is the key to mitigating the risks of a spill.

“In our view, the current response-time planning standards will not ensure the best possible outcomes in some spill scenarios,” the report said. The current rules were put in place after the Exxon Valdez disaster in 1989, when an oil tanker struck a reef in Alaska, releasing 44,000 tonnes of oil into Prince William Sound.