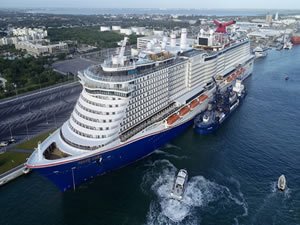 Carnival Corporation has announced plans to resume cruise operations for eight of its brands in the United States, the Caribbean and Europe.

“For all of our brands, our highest responsibility and top priorities are always compliance, environmental protection, and the health, safety and well-being of our guests, our shipboard and shoreside employees, and the communities we visit,” said Roger Frizzell, chief communications officer for Carnival Corporation.

“We are excited to see eight of our world-leading cruise line brands sailing this summer, and to date, we’ve announced over half of our capacity returning by the end of the fiscal year, as we work to meet significant pent-up demand for cruising and get back to what we do best – serving our guests with one of the world’s most popular vacations.”

Carnival Cruise Line is set to resume operations with eight ships starting with the inaugural sailing of the new LNG-powered Mardi Gras from Port Canaveral, Florida on July 31.

Additional sailings out of Galveston, Miami, Long Beach and Seattle (to Alaska) will resume by end of August. A full list of sailings, provided by Carnival Corp. is below.

The sailings announced Wednesday follow the return of Carnival Brands AIDA Cruises and Costa Cruise in Europe in March and May, respectively.

“The broader restart of cruising marks a critical step in the recovery of our brands and the industry as a whole, which provides a major economic impact and supports jobs across multiple sectors around the world,” added Frizzeli.

“As our cruise line brands collaborate closely with our port, destination, supply chain and travel agent partners on a responsible resumption of cruise operations, we will ensure we continue working together across the industry in the best interest of public health.”

North America Brands: Carnival Cruise Line has announced it will resume guest cruise operations with eight ships by the end of August, including sailings out of Galveston, Miami, Port Canaveral, Long Beach and Seattle (to Alaska).

Included in that roster is Mardi Gras, the line’s newest and most innovative ship, and first cruise ship in North America powered by eco-friendly liquefied natural gas (LNG), with sailings from Port Canaveral starting on July 31.

Princess Cruises expects to resume guest cruise operations in July with Alaska sailings and a series of cruises around UK coastal waters, as well as cruises out of Los Angeles, San Francisco and Fort Lauderdale to the Caribbean, Panama Canal, Mexico, Hawaii and California coast starting in September.

Holland America Line expects to resume guest cruise operations in July with Alaska sailings, followed by sailings from Greece in August, and from Italy and Spain in September, as well as sailings to Mexico, Hawaii, the California coast and the Caribbean this fall.

Seabourn expects to resume guest cruise operations in July sailing from Greece and Barbados, along with the beginning of the Antarctica season in November.

Costa Cruises resumed guest cruise operations in May with sailings in Italy and Greece, and is now offering sailings to France and Spain in July, followed by Portugal and Turkey in September.

AIDA Cruises resumed guest cruise operations in March sailing in the Canary Islands, in May with sailings in Greece and Germany, and is now offering additional sailings out of Germany as well as sailings in Spain, Italy, Portugal and Malta from July, and the Persian Gulf from November. P&O Cruises (UK) will offer a series of cruises this summer sailing around UK coastal waters beginning in June, expanding to the Mediterranean and the Atlantic coast starting in September.

Cunard will offer a series of cruises this summer sailing around UK coastal waters in July, followed by voyages to the Iberian coast and Canary Islands. In November, Queen Mary 2 returns to service with a combination of transatlantic crossings and Caribbean cruises.