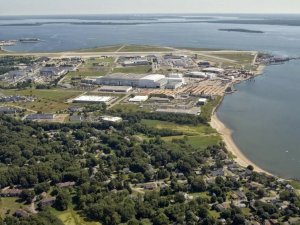 The state of Rhode Island announced it will provide $20 million in incentives to General Dynamics Electric Boat to help the submarine builder expand its facilities.

The infrastructure investment announced today by Rhode Island Governor Gina M. Raimondo will allow Electric Boat to accelerate the hiring of 1,300 new employees over the next decade as the builder is slated to produce 29 Virginia Class Submarines and 12 Columbia Class submarines for the U.S. Navy.

Over the next 10 years, General Dynamics Electric Boat will invest more than $800 million to double its footprint in Quonset Point, adding roughly 1.3 million square feet of manufacturing space, about half of which will be new construction. The company will also expand its facility at the Quonset Business Park.

The announced expansion comes as Electric Boat is currently building two Virginia class submarines per year and was recently selected as the prime contractor on the Columbia class of submarines.

“We at Electric Boat are looking out toward a bright future with the potential opportunity for substantial new work and accompanying growth,” said Jeffery S. Geiger, President, General Dynamics Electric Boat. “This investment makes it very clear to our U.S. Navy customer that Rhode Island is ready, willing and able to support our efforts to build a great submarine fleet.”

“Electric Boat is once again doubling down on Rhode Island,” said Governor Raimondo. “Because of our new job training programs, the work we've done over the last three and half years to make it easier to do business in Rhode Island and because we're finally willing to invest in infrastructure, Electric Boat is hiring thousands of Rhode Islanders for good, stable manufacturing jobs.”

This news is a total 730 time has been read
Tags: Rhode Island Backs Electric Boat Expansion