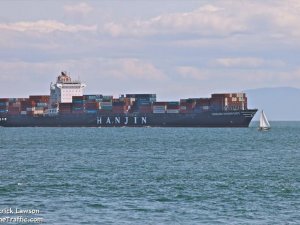 Reports yesterday claimed it had sold the India Rickmers to shipbreakers, setting a new record for the youngest ever box ship scrapped.

In an announcement to the Singapore Stock Exchange, RMT said that, in connection with a potential debt settlement agreement, “the trust is considering, amongst other things, the sale of the vessel”.

Yesterday vesselvalues.com claimed the 4,250 teu vessel, launched in 2009 at China’s Jiangsu New Yangzijiang yard, had a market value of $5.87m and demolition value of $5.62m, after losing some 62% of its value this year alone, indicating the parlous state of the panamax charter market for owners.

This has been exacerbated by the bankruptcy of Hanjin Shipping – the India Rickmers was previously known as the Hanjin Newport, but has been at anchor in the Persian Gulf for the past two weeks.

The weak market has hit Rickmers Maritime Trust hard. Trading in its shares was suspended by the Singapore Stock Exchange on 16 November after the company defaulted on the interest payment on a S$100m bond issue.

The company, which owns a fleet of 16 panamax box ships, posted a loss of US$74.m in the third quarter this year, compared with a $9m profit in the same period last year. Charter revenue plunged 43%, year-on-year, to just $15.6m.

RMT posted a nine-month loss of $131.7m, after breaking even in the same period last year, and there is little chance it will be able to return to the black this year.

According to the Hamburg Ship Brokers & Ship Agents Association, which produces the weekly ConTex charter rate index, the market continued to track down this week, with vessels in that 4,250 teu size attracting a daily rate of $4,237 over a 12-month charter.

Today in its weekly commentary, the association said: “As usual these days the majority of fixtures reported are extensions, [and] thus we are still lacking new requirements. Since the year-end is approaching it will be interesting to note if the start of the new alliances with new services and trades for 2017 will eventually have a positive influence on the demand side.

“Unfortunately the fact that so far this year more than 180 vessels with a total [capacity] of roughly 650,000 teu went for demolition has no impact on the charter market at all, since the oversupply of tonnage still persists.”

This news is a total 6593 time has been read
Tags: Rickmers Maritime Denies Reports It Sold 7-Year-Old Containership for Scrap