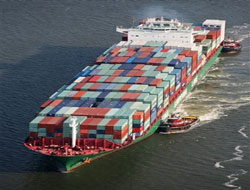 Crude imports rose 8.8 percent in the first nine months of the year

The Baltic Dirty Tanker Index, a measure of chartering rates, rose 67 percent in the year ended Sept. 30, helped by rising demand for gasoline and other fuels in China, the world's second- largest energy user. The country's crude imports rose 8.8 percent in the first nine months of the year.

Gains were eroded by declining bulk rates caused by the launch of new vessels increasing global capacity and Chinese steelmakers curbing production on slowing demand. The Baltic Dry Index, a measure of rates for carrying coal, iron ore and other commodities, fell 66 percent in the year ended Sept. 30.

China Shipping Development operated 56 tankers and 116 bulk ships as of June 30. Another 66 vessels were due to be delivered by the end of 2012.

The company has boosted cooperation with its largest customers, such as Baosteel Group Corp. and PetroChina Co. through ventures and long-term contracts, it said in August.

China Shipping Development dropped 1 percent to HK$5.92 in Hong Kong trading before the earnings announcement, extending losses for the year to 71 percent. That compares with a 78 percent decline for China Cosco Holdings Co., the country's largest bulk-shipping line.

In Shanghai, China Shipping Development slipped 1.6 percent to 7.62 yuan. The stock has dropped 79 percent this year.

This news is a total 905 time has been read