Risk to Shipping Set to Rise in Middle East with U.S. Attack on Top Iranian Commander 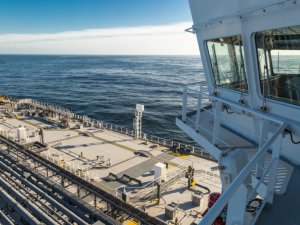 The risk to shipping in the Persian Gulf region is set to rise following a U.S. airstrike in Iraq that killed a top Iranian commander, just months after spiking to record levels on heightened geopolitical risk.

The attack, for which Iran has vowed retaliation, escalates tensions in a region that exports much of the world’s oil. Brent crude prices jumped as much as 4.9% in intraday trading.

In October, daily earnings for some supertankers soared to more than $300,000 a day, after Iran said missiles hit one of its vessels in the Red Sea. That followed attacks on Saudi Arabia’s oil infrastructure a month earlier. Tensions in the region have been especially high since the U.S. reimposed sanctions on Iran in late 2018. Separate American sanctions on some vessels from China also contributed to an increase in shipping rates last year.

Anything that could threaten trade in the region is closely watched since about a third of the world’s oil transported on tankers moves through the Strait of Hormuz, bordered by Iran to the north.

“The initial impact on the market should be positive,” Pareto Securities AS said in a note on shipping. Looking further ahead, it noted that higher oil prices and shipping rates would start to threaten oil consumption in Asia and weigh on tanker demand.

Fearnley Securities AS said it doesn’t expect Iran to close the strait because of China’s reliance on its crude but risk premiums will be higher for now. The event could “trigger attacks on tankers lifting crude from U.S.-allied countries,” such as Saudi Arabia or the U.A.E., according to Fearnleys analyst Espen Fjermestad. The event could prompt demand for restocking inventories, he said.

“Overall, it remains too early to assess the market impact, though increased concerns on cargo availability should likely keep the market well-supported,” Clarksons Platou Securities AS said in a note.

This news is a total 1887 time has been read
Tags: middel east, persian gulf shipping, strait of hormuz, U.S Attack on Top Iranian Commander, Risk to Shipping Set to Rise in Middle East