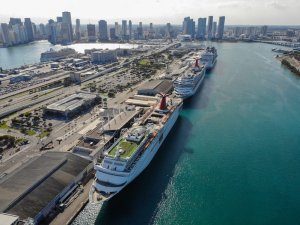 Royal Caribbean Cruises Ltd. and Norwegian Cruise Line Holdings Ltd., two long-time rivals in the cruise business, have joined forces to study ways to make ships safer and win back customers after the coronavirus shut them down in March.

The companies asked former Utah governor Mike Leavitt and Scott Gottlieb, ex-commissioner of the U.S. Food and Drug Administration, to serve as co-chairs of an 11-member group called the “Healthy Sail Panel.” The group, whose work is paid for by the lines, includes physicians and other health-care professionals, as well as representatives from the two companies.

The panel has already been meeting for a month. Recommendations, which will not be binding, should be out by the end of August, the companies said in a statement.

Cruise ships were the site of a number of Covid-19 outbreaks and the industry has had to wrestle with issues including where they let passengers disembark and how to get crew members home. Cruise lines also face several lawsuits over their handling of the pandemic. They are expected to resume sailing in September, although that date has already been pushed back.

Shares of cruise operators have also been hit hard, making up three of the four worst-performing stocks on the S&P 500 Index this year.

The European Union last week published a 49-page report on the industry, which included input from Royal Caribbean. It featured recommendations such as shorter trips, limits on capacity, and mask-wearing by guests and crew. The report also called for cruise operators to provide host ports with details on how they will deal with quarantining sick guests and returning staff to their home countries in the event of an outbreak.

“Everything’s on the table,” Royal Caribbean Chief Executive Officer Richard Fain said in a group interview. “We’ve made it clear, we don’t consider ourselves experts. We have some of the world’s leading experts here to advise us.”

Health facilities on ships may look very different in the future and will include more resources such as testing services aboard, Gottleib said. “There’s absolutely going to be changes,” he said.

Other changes could be in place for cruise guests when they return, such as more limited itineraries. With some countries still reluctant to let thousands of tourists in all at once, the lines may feature extended stops at the private islands they operate in the Caribbean, at least initially, according to Norwegian’s Chief Executive Officer Frank Del Rio.

“Certainly we will lean on them,” he said.

Leavitt, who served as governor when the state hosted the 2002 Winter Olympics just months after the Sept. 11 terrorist attacks, said he learned from that experience that rigorous planning can mitigate risks.

“A lot of the same kind of thinking has to apply not just in the cruise industry, but across the board,” he said. “Because we are managing, in essence, a new risk that we have not dealt with before.”

This news is a total 2086 time has been read
Tags: coronavirus, cruise ships