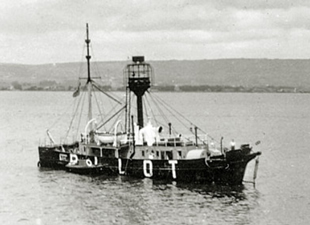 Amongst the many reminiscences and accounts shared here every week, ships, very understandably, have featured regularly.

Little wonder! We live on an island where the sea and our maritime heritage profoundly affects us in every way.

“The sound of a steamer’s horn at night still conjures up my whole boyhood,” admitted C.S. Lewis, who used to gaze across Belfast Lough and the shipyards with his beloved telescope.

One of the highlights of Lewis’s childhood was the annual seaside holiday with his mother and brother, often to Castlerock.

In 1901 his mother wrote home from the north coast to husband Albert “Today baby was very anxious to get into the water!”

From thence and many other nautical encounters came countless evocative references to the sea by Ulster’s iconic author, such as one literary gem (of many) in Dawn Treader - “Ah, you’ve come over the water. Powerful wet stuff, ain’t it?”

We’re back on CS’s wet stuff today, with an update on a maritime story shared here early last year, and with a peek preview of a lone star that Lewis probably observed through his childhood telescope.

It is currently being converted into a houseboat by its discoverers - father and son ‘D.I.Y ship-restorers’ David and Simon Dudley.

Cormorant has had different duties, moorings and names since she was launched almost a century and a half ago in Cork, and David and Simon are compiling their beloved lightship’s history, which included a lengthy assignment in Northern Ireland.

When David contacted Roamer last year he hoped that “amongst your readers will be descendants of the pilots and crew who may have photos or mementos of the vessel.”

In 1942 Cormorant was purchased by the Belfast Harbour Commissioners and renamed Lady Dixon.

Between 1943 and 1959 she was moored off Carrickfergus and was known as the Belfast Pilot, with a crew of 10 and with nine pilots aboard.

In March 1961 she was sold to a Belfast owner, and then to John Thompson from Slough, who intended to use her as the U.K’s first offshore radio station. Thompson hoped to commence broadcasting on 1st December 1961, but ran into stiff opposition from the UK Government and the BBC. A partner in the project, Arnold Swanson, split from Thompson in January 1962 to start his own station called GBOK (Great Britain OK).

David Dudley has just contacted Roamer with a progress report on their research into Cormorant’s history. He explained that their blog “finally produced a Northern Ireland contact who remembers Cormorant when she was a Pilot Station in Belfast Lough.”

The contact was Alex Coulter who told David “My father John Coulter worked for 23 years in charge of the pilot cutter Rosa.

She carried the ships’ pilots that piloted ships into Belfast. The Pilot Master, pilots and deck crews lived aboard the Lady Dixon.

“Dad would take the Pilots down to go aboard the Lady Dixon. The two Pilot Masters were David Hunt and James Owens. I went with him a number of times. When the Lady Dixon was off for overhaul her replacement was the Sir Thomas Dixon - an old Steam Yacht.”

Mr Coulter, who followed his father into seafaring, skippered the Belfast tugboats Somerton and Sir Kenneth, and was a Belfast harbour berthing master.

David Dudley has a copy of Lady Dixon’s log book for September 1956 which “shows J. Owens as the Pilot Master at that time.

It also shows the names of the Pilots on board each day, which ships they boarded and what the weather was like!”

He also has a copy of the Belfast Harbour Commission Board minutes from 26 Jan 1960 “which record that the Lady Dixon was to be dry-docked, to be replaced on station by the Commissioners’ tender Sir Thomas Dixon.”

David and son Simon are delighted that the documents and Mr Coulter’s memories are “the first direct link” with Cormorant/Lady Dixon/Belfast Pilot during her working life.

They’d like to source any other folks’ memories of the vessel via their blog and progress report on www.cormorantlightship.blogspot.co.uk which “is going well with about 1,000 hits a week lately and rapidly approaching the 50,000 mark,” David Dudley told Roamer.

Belfast’s nautical ‘gold nugget’ is the world-famous Nomadic, Titanic’s little tender ship. A young C.S. Lewis could well have focused his telescope on the newly launched Nomadic on Belfast Lough in 1911.

As the last remaining White Star Line vessel in the world, her conservationists have named their official journal The Lone Star.

The 11th issue of the Nomadic Preservation Society’s journal has just been published, a colourful compilation of maritime stories about Titanic’s ‘little sister’, one of Belfast’s most popular visitor attractions.

Lone Star reports on Nomadic’s up-keep, maintenance and latest innovations with intriguing accounts of her heroism at sea during war, and an unfortunate collision at sea in 1932.

There are several dozen longer and shorter maritime stories included, about Nomadic and Belfast’s unique nautical past.

But it was an experiment for the proposed installation of a proper fogging machine in the future.

This news is a total 7243 time has been read
Tags: Lone Star, ship, popular, maritime