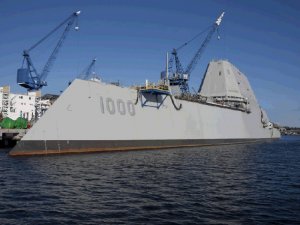 Rolls-Royce has delivered the twin fixed pitch propellers for installation on the future USS Zumwalt, the first ship of the DDG 1000 multi-mission destroyer class.

The five-bladed nickel aluminum bronze propellers measure over 18 feet in diameter and weigh nearly 60,000 pounds apiece. They were cast and machined at the Rolls-Royce facility in Pascagoula, MS. The production of the unique pattern, designed by NAVSEA, began over six years ago, with the first set of finished propellers being delivered to the shipbuilder by Rolls-Royce from Pascagoula to Bath Iron Works in Bath, ME, in May this year.

"The delivery and installation of these highly engineered propellers is a real milestone in the build of this amazing ship, as the Navy will now be able to commence further systems testing, followed by sea trials in the near future," saidd Don Roussinos, President - Naval, Rolls-Royce.

In addition to the twin fixed pitch propellers, onboard the Zumwalt are two Rolls-Royce MT30 Main Turbine Generator Sets (MTGs) and two RR4500 Auxiliary Turbine Generator Sets (ATGs) that will provide a total of 78 MW for total ship power - the MTGs provide 35.4 MW each and the ATGs 3.9 MW each. The MT30 MTGs are produced in England, and the RR4500 ATGs are produced in Indianapolis, IN.

The MT30 is the most power dense marine gas turbine in the world, selected to power the most modern and advanced vessels in the U.S Navy, including the Freedom Class Littoral Combat Ship, as well as with the Royal Navy's Queen Elizabeth Class aircraft carriers and innovative Type 26 Global Combat Ship, and the Republic of Korea Navy's FFX Batch II frigate.

This news is a total 2981 time has been read
Tags: rolls royce, delivery, zumwalt, turkishmaritime