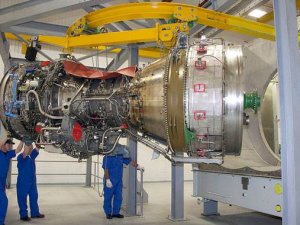 Rolls-Royce has signed a contract to supply the MT30 gas turbine packages for the first three Type 26 Global Combat Ships for the Royal Navy.

Rolls-Royce will now begin manufacture of the gas turbines and the surrounding steel packages for the ships, which are to be built by prime contractor BAE Systems.

Don Roussinos, Rolls-Royce, President – Naval, said, “The selection of the MT30, the most powerful marine gas turbine in operation today, for the Type 26 continues our long and successful history of developing and supplying gas turbines for the Royal Navy fleet.

“We’re extremely proud that our MT30 will be powering the Type 26 and look forward to working with BAE Systems and the Royal Navy on this exciting project.”

The MT30 is derived from Rolls-Royce Trent aero engine technology and builds on over 45 million hours of operating experience and ultra-high reliability.  Producing 36 to 40 megawatts, it is the world’s most powerful in-service marine gas turbine and has the highest power density - a key factor in naval propulsion where delivering a high power output in a compact space is essential.

The MT30 is initially built in separate modules on the same build line as the Rolls-Royce Trent aerospace engines in Derby. It is then assembled at the company’s Bristol facility, where the engines will undergo a rigorous test program before the first one is delivered to the Type 26 program in late 2016.

Earlier this year, Rolls-Royce installed the first MT30 in the Royal Navy’s second new Aircraft Carrier HMS Prince of Wales. The MT30 is also in service with the US Navy and has been selected for the Republic of Korea Navy’s latest frigate program.