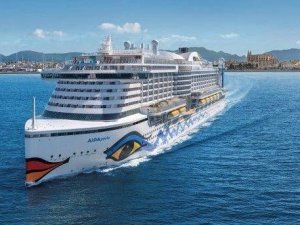 Rotterdam’s cruise season starts on 15 March. AIDAperla will arrive for the first time at the Cruiseport Holland Amerikakade at 08.00 hours on that day.

The vessel replaces the AIDAprima. That vessel arrived in Rotterdam a total of 78 times between April 2016 and November 2017

AIDAperia was taken into operation in 2017 and is a sister vessel of AIDAprima. Only the interior differs from the Prima. The vessel will also sail weekly between Hamburg, Southampton, Le Havre, Zeebrugge (Brussels) and Rotterdam.

Until November, AIDAperla can be admired on the Wilhelminapier every Thursday. The ultra-modern vessel is equipped to convert LNG - liquefied gas - on board to power the vessel’s hotel function. A truck will deliver the LNG.

With some 80 arrivals, it promises to be a busy cruising season in Rotterdam. The high points are the arrivals of the Seabourn Ovation on 2 October, a ‘five-star plus’ vessel, and the AIDAnova on 21 November, the first LNG-powered cruise ship.

A total of seven other cruise ships will arrive from the still young English company, Cruise & Maritime Voyage; all four-star vessels. Not new, yet always awe-inspiring are the arrivals of the Queen Elizabeth, Independence of the Seas and Magallan.

There is also a special focus on SS Rotterdam this year, as Rotterdam celebrates the 145th anniversary of the Holland America Line.

This news is a total 733 time has been read
Tags: Rotterdam Cruise Season Opens with Arrival of AIDAperla