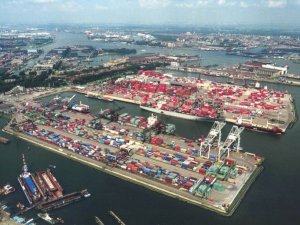 "This has proven a fine quarter for our port statistics," said port authority CEO Allard Castelein.

"Still, this growth is offset by lower volumes of coal due to the closure of two coal-fired power plants. Likewise, the throughput of fuel oil in the third quarter was also lower," he said.

The port's total throughput in 2017 is expected to be one to two per cent higher than that recorded in 2016.

Said Mr Castelein: "Reviewing the coalition agreement recently published by the new Dutch government, it appears that in the period ahead, the government will be devoting more attention to the challenges that face us in the longer term."

Container throughput in the first nine months was up 11.7 per cent in term of tonnes, mainly due to an increase in the number of laden boxes.

"At the very least, Rotterdam's market share in the Hamburg-Le Havre range is expected to remain stable at the highest level since 2001 as 30.9 per cent in TEU terms," said the port statement.

Container throughput increases can be attributed to solid autonomous growth in Europe combined with Rotterdam's favourable position within the new sailing schedules recently adopted by the major alliances.

As well credit can be given to increased productivity and throughput volumes at the Maasvlakte 2 terminals and Rotterdam's strengthened appeal as a transshipment port in connection with increased vessel sizes and relay/feeder options to/from other European ports, said the port authority.