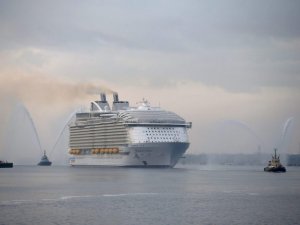 Royal Caribbean Cruises Ltd. lowered its outlook for 2016 profit, citing an increase in fuel prices and a weak British pound following the U.K. vote to leave the European Union.

Full-year earnings excluding some items will be $6 to $6.10 per share, down from a previous range of $6.15 to $6.35, according a statement from the Miami-based company Tuesday.

The company had expected weakened demand from European consumers following the U.K.’s Brexit referendum, but there was no effect.

“It was all in the news and everybody was focused on that,” Chief Executive Officer Richard Fain said on a conference call. “We would have expected if only from the distraction to have an impact on booking and we saw literally nothing.”

The shares fell 6.8 percent to $67 at 12:07 p.m. in New York Tuesday. The stock had plunged 29 percent this year through Monday’s close. Norwegian Cruise Line Holdings Ltd. dropped as much as 7.5 percent and Carnival Corp. slid as much as 3 percent Tuesday.

Among cruise-line operators, Royal Caribbean is the second-most exposed to foreign currency risks, at 35 percent, Wolfe Research analyst Jared Shojaian wrote in an note last week. Carnival is the most exposed at 50 percent, followed by Norwegian at 16 percent, according to Shojaian.

In the second quarter, Royal Caribbean’s earnings excluding certain items were $1.09 a share, exceeding the $1.02 average of analysts’ estimates compiled by Bloomberg. Revenue rose 2.3 percent from a year earlier to $2.11 billion, compared with the $2.17 billion seen by analysts. Net income climbed to $229.9 million, or $1.06 a share, from $185 million, or 84 cents.

A lower-than-expected fuel expense in the second quarter partially offset the full-year impact of weaker foreign currencies and rise in fuel prices, the company said.