Royal Caribbean to Stay in Virgin Islands for 10 More Years 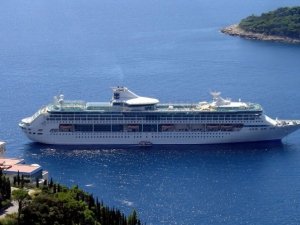 The Virgin Islands Port Authority has signed a ten-year agreement with the second largest cruise line in the world, Royal Caribbean Cruises, Limited (RCCL) extending the cruise line’s berthing privileges at the port.

VIPA Executive Director Carlton Dowe said that the agreement between the Port Authority and Royal Caribbean was finalized on December 11, 2015. The contract commences on October 1, 2016 and is for a term of 10 years with a five year option to renew.

“This agreement, which benefits both parties, includes a provision for RCCL to have guaranteed berthing privileges along the southern portion of the pier at the Austin “Babe” Monsanto Marine Facility in Crown Bay, St. Thomas. The contract also requires RCCL to guarantee a certain amount of passengers, and includes increases in port fees going forward that will be paid to the Authority in accordance with the new unified tariff implemented by the VIPA Board,” he said.

The agreement also includes a provision for RCCL to pay port fees to berth at the Ann E. Abramson Marine Facility on St. Croix, which had been free since 2002.

“The operation and maintenance of the Abramson Facility has been a tremendous financial burden to VIPA since it has been used at no charge to the cruise lines for 13 years and this practice could no longer be continued. These fees will allow us to invest in the improvement of our port infrastructure,” Dowe said.

The agreement between VIPA and RCCL took several years of negotiation.

Royal Caribbean’s Allure of the Seas and the Oasis of the Seas, which are the two largest cruise ships in the world, alternate weekly visits to Crown Bay. Both ships can bring up to 6,296 passengers per visit. RCCL currently brings the most passengers to St. Croix: the Adventure of the Seas (3,114 passengers) and the Jewel of the Seas (2,501 passengers) per berth in Frederiksted.