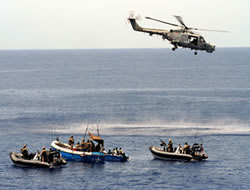 With insufficient evidence to directly link them to a specific attack, the Royal Navy yesterday released ten pirate suspects, but burned one of their two skiffs.

With insufficient evidence to directly link them to a specific attack, the Royal Navy yesterday released ten pirate suspects, but burned one of their two skiffs.

The skiffs, with ten people aboard, were found to be equipped with extra barrels of fuel, grappling hooks and a cache of weapons that included rocket-propelled grenades, machine guns and ammunition.

Though this was deemed insufficient evidence to detain the group, they were disarmed and released.

Portland destroyed one of the skiffs and confiscated all the weapons

This news is a total 1132 time has been read