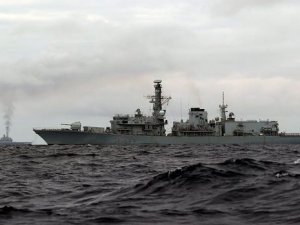 Britain said on Thursday it would keep a close eye on a fleet of Russian warships approaching British waters on their way to the eastern Mediterranean.

The Norwegian military on Wednesday released pictures taken by surveillance aircraft of the fleet, which includes the aircraft carrier Admiral Kuznetsov and the Pyotr Velikiy battle cruiser, sailing in international waters.

"When these ships near our waters we will man-mark them every step of the way," Fallon said. "We will be watching as part of our steadfast commitment to keep Britain safe."

Russia's TASS state news agency said in July that the Admiral Kuznetsov would take part in a Russian operation in Syria from October to January. The warship would carry 15 Su-33 and MIG-29K jet fighters and over 10 Ka-52K, Ka-27 and -31 helicopters, it said.

Images released by the Ministry of Defence showed a British destroyer in the foreground and vessels it said were part of the Kuznetzov fleet in the background.

Russia, which has backed Syrian President Bashar al-Assad with an air campaign against rebels fighting him, including in the besieged city of Aleppo, told the Norwegian armed forces the warships were on their way to the Mediterranean Sea, Norwegian media reported.