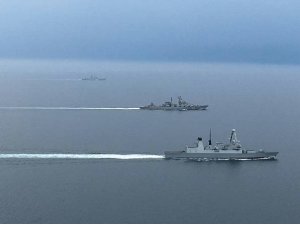 A British destroyer has shadowed two Russian warships as they passed through the English Channel for the second time this year, the Royal Navy said.

HMS Diamond sailed from Dover as the destroyer Severomorsk and cruiser Marshal Ustinov passed by on Tuesday.

“This is routine business for the Royal Navy and the second time my ship’s company have undertaken such an escort duty this summer,” said Commander Ben Keith of HMS Diamond.

In January, Royal Navy frigate HMS Westminster was sent to monitor four Russian vessels as they passed close to British waters. The two frigates, Soobrazitelny and Boiky, and support vessels, Paradoks and Kola, were believed to be returning from operations in the Middle East.

This news is a total 700 time has been read
Tags: Royal Navy Monitors Russian Warships in English Channel