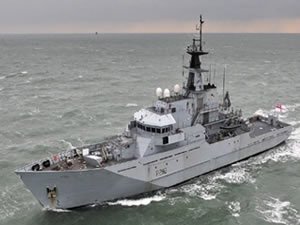 Fishing rights are a key sticking point in the last-minute negotiations between the UK and the EU over the terms of Britain's long-awaited exit from the European Union.

Though the UK has formally left the EU, their relations are still governed by a status-quo transition agreement, which expires at the end of this month. If there is no deal by that point, UK waters will no longer be accessible to French fishermen - and the Royal Navy stands ready to keep them out.

Starting January 1, four Royal Navy patrol vessels will be deployed to board, inspect and (if necessary) arrest any EU-flagged fishing vessel within the UK EEZ, according to Reuters. The patrols will be particularly focused on fishing activity in the English Channel. The Sunday Times reports that the government of UK Prime Minister Boris Johnson is currently preparing legislation to provide Royal Navy crews with the necessary policing authority.

"The MOD has conducted extensive planning and preparation to ensure that Defence is ready for a range of scenarios at the end of the transition period," a UK defense official told Reuters and CNN on Saturday.

The plans do not include the use of force, a Royal Navy source told The Guardian. “Nobody is going to be firing warning shots against French fishermen," the source said.

The Royal Navy's four River-class patrol vessels will be assigned to this new role. The class currently performs a fishery protection mission, along with a variety of periodic taskings, including monitoring Russian warships in UK waters, intercepting maritime migrants in the English Channel and performing overseas missions in the Falklands and the Mediterranean.

The potential for confrontation over fishing rights echoes back to the "Cod Wars" of the 1970s, when the government of Iceland declared a 12-nautical mile exclusive economic zone and forcibly ejected British trawlers from waters within it.

At that point in time, the global 12-nautical mile territorial sea / 200-nautical mile EEZ standard for coastal state governance had not yet been established, and UK cod fishing vessels would venture within miles of Iceland's coast.

After years of conflict, dozens of rammings and countless net-cutting incidents - and a threat to withdraw from NATO - Iceland succeeded in negotiating an end to UK fishing in its waters.

UK and French fishermen have also clashed over scallop-fishing rights in the English Channel, with rivalry driven in part by differences in seasonal limits between the French and UK fleets.