Royal Navy would be challenged 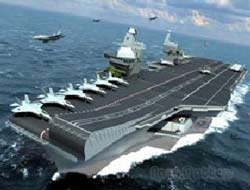 This morning's press is saturated with stories regarding a report from the MoD that stated: ""The current material state of the fleet is not good. The Royal Navy would be challenged to mount a medium-scale operation in accordance with current policy against a technologically capable adversary."

The report was commissioned by the Defence Secretary Des Browne who also faces embarrassment over an email the Tories claim come from senior MoD officials that state he was planning to scrap the two aircraft carriers, QUEEN ELIZABETH II and the PRINCE OF WALES to save money, however, the email said that he "...only balked at doing so at the last minute due to the impact on 400 apprentice jobs in the Prime Minister's constituency at Rosyth Dockyard, where assembly work will take place."

Mr Browne is said to have responded that the aircraft story was "utter nonsense" with sources close to him claiming it was a work of fiction.

The email was allegedly sent to Shadow Defence spokesman Liam Fox's chief of staff and went on to say, "Funding for the carriers is decimating all other programmes due to the poor defence settlement from the Comprehensive Spending Review", according to The Telegraph. A spokesman for Dr Fox, says the newspaper, said the source of the email was someone in a senior position who was due to retire, but did not name him.

According The Telegraph, a source close to Gordon Brown said the Tories had been 'fooled' by someone with "a very active imagination"

Des Brown insisted that the carriers were on schedule for delivery in 2014 and 2016.

This news is a total 676 time has been read