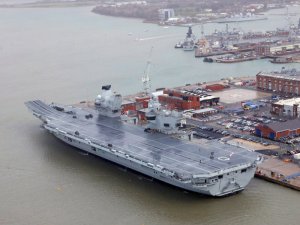 The UK’s biggest and most-advanced aircraft carrier, HMS Queen Elizabeth, was commissioned into the Royal Navy on Thursday by Her Majesty the Queen during a ceremony at the Portsmouth Naval Base, in Portsmouth, England.

During the ceremony, Queen Elizabeth spoke before the ship’s Commanding Officer, Captain Jerry Kyd, read the commissioning warrant and the White Ensign was raised, symbolizing the commissioning of the country’s future flagship into the Royal Navy fleet

“In hoisting the White Ensign from HMS Queen Elizabeth today, Britain has confirmed her place among the world’s great maritime powers in the most majestic and muscular terms,” said Admiral Sir Philip Jones, First Sea Lord and Chief of Naval Staff.

Having successfully completed second stage of sea trials off the south coast of England, the HMS Queen Elizabeth returned recently alongside her home port of Portsmouth.

The aircraft carrier is the first of two planned Queen Elizabeth-class carriers. At 70,600 tonnes, the HMS Queen Elizabeth is the biggest warship ever constructed for the UK Royal Navy.

Both new aircraft carriers will be able to perform a wide range of tasks, from humanitarian and disaster relief to fighting terrorism and high-end warfighting. The second carrier, HMS Prince of Wales, has already been named in Rosyth and is currently structurally complete.

To date, over 10,000 people across the UK have contributed to the delivery of the HMS Queen Elizabeth under the Aircraft Carrier Alliance.

“Today marks the start of a hugely significant chapter for the Royal Navy, and indeed the nation, as the future flagship is commissioned into Her Majesty’s fleet”, said Defence Secretary Gavin Williamson. “It is an honour to witness the crowning moment of an extraordinarily busy year for the Royal Navy that has seen us name the second carrier, HMS Prince of Wales, cut steel on the first Type 26 frigates and launch the National Shipbuilding Strategy.”

Following more building and trials in the coming year, the HMS Queen Elizabeth will head to the United States for initial flight trials off the coast in Fall 2018.

This news is a total 954 time has been read
Tags: Royal Navy’s Biggest-Ever Warship, HMS Queen Elizabeth, Commissioned in Portsmouth