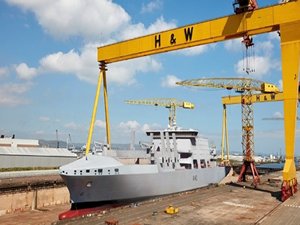 The UK Ministry of Defence's contract tender for three new fleet auxiliaries has begun again, nine months after it was suspended amidst concerns about foreign bidders.

In May 2018, MoD posted a contract tender for up to three "Fleet Solid Support" ships to resupply the Royal Navy's fleet with dry stores. The specifications called for 250,000 cubic feet of cargo space, a cruising speed of 18 knots, an UNREPS speed of 12 knots and ship-to-ship transfer capacity of five tonnes per load.

the MoD invited overseas shipbuilders to participate in the bidding, drawing criticism from maritime unions and domestic shipbuilding advocates. Despite the domestic pressure, the FSS project attracted interest from multiple defense shipbuilders around the world, including Navantia, Fincantieri, Japan Marine United and DSME. All but Navantia ultimately dropped out.

In November 2019, the MoD published a sweeping outside review of the UK's National Shipbuilding Strategy. In the report, prominent businessman Sir John Parker recommended that "UK-only competition should be considered for future defence-funded vessels,” pointing to the benefits of sustaining the UK industrial base. The MoD suspended the FSS bidding process the next day, saying that it was "clear that the current approach will not deliver the requirement."

With the onset of the COVID-19 shutdown and the contraction of the national economy, defense insiders raised concerns that the FSS project could be canceled altogether due to budgetary constraints, with scarce funds going towards warship acquisition instead. The MoD said that it was still working on FSS procurement despite declining tax revenues - and true to its word, it is reopening the procurement process with a series of events to gauge bidder interest. Controversially, it has also left the door open to "international suppliers," angering domestic shipbuilders once again.

"[This is] an absolute disgrace. The Defence Select Committee will undoubtedly be taking this up, which is presumably why they have sneaked this out in the [parliamentary] recess," said Labour MP John Spellar in a statement. "And spare us any bleating excuses about EU procurement rules, just buy and build British."

UK shipbuilding advocacy group Keep Britain Afloat warns that after the completion of the Royal Navy's two new aircraft carriers, there will be a two-year gap in procurement before the next major naval vessel contract begins, putting about 40,000 jobs at risk. The group argues that the $1.7 billion contract for the FSS program should stay within the UK, supporting yards and local economies around Britain.

"The FSS program is a perfect example of what the prime minister would call a shovel-ready project," said Shipbuilding and Engineering Union General Secretary Ian Waddell in a statement."It will get the post-coronavirus economy up and running as part of the levelling up agenda by injecting [$1.7 billion] into regional economies and could benefit every single shipyard in the UK."

Foreign construction would not be a new option for a Royal Navy fleet auxiliary. The service currently operates four DSME-built fleet oilers, which were launched in Okpo, towed to the UK, outfitted locally and delivered in 2017-2019. The total acquisition cost came to roughly $200 million per unit.

This news is a total 2528 time has been read
Tags: Royal Navy's "Build British" Debate Heats Up Once More