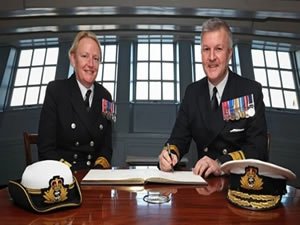 Terry takes the helm as the service's Director of People and Training and Naval Secretary. In her new post, she holds responsibility for 40,000 sailors and Royal Marines, the Royal Fleet Auxiliary, and civil servants and contractors, who all serve the Royal Navy at posts around the world.

Women have served in the Royal Navy since World War I and have been going to sea since 1990. All positions and units are open to women by policy, but Terry is the first to attain rank above commodore.

In a statement, she said that “someone has to be first,” and she does not expect to be the last: there are currently four female commodores and 20 female captains in the service.

Terry brings an egalitarian perspective to her new post. In a statement, she said that she believes talent, ability and dedication are the only factors determining success in the Royal Navy; background, education and patronage "count for nothing" compared to the real-world capabilities each individual brings, “The world has changed in terms of what people want from life and careers, whatever their gender, and the Navy needs to work to modernize our organization to support this change – a diverse and inclusive workforce is a better place for all but is also proven to deliver better outcomes,” Admiral Terry said.

She took the reins of her department from her predecessor Rear Admiral Phil Hally on Monday after a ceremony aboard HMS Victory in Portsmouth.

“Our people and their families are at the heart of our ability to deliver on operations abroad and in the UK. I look forward to leading my team in supporting them, using modern approaches, helping us all to be the best we can be, and building on the work already done by my predecessor," she said.

Terry joined the Navy in 1997 at the age of 24 and only planned to stay for eight years. At the time, no female officer had commanded a warship.

There were few role models, and fewer still with seagoing experience. Eight years turned into 25 because, she says, “if you enjoy your job, you keep on doing it."

Later, as military assistant to the Chief of Joint Operations, she was among the first personnel on the ground in Sierra Leone during the operation to stop the spread of Ebola in 2014.

This news is a total 835 time has been read
Tags: First Female Admiral , Royal Navy