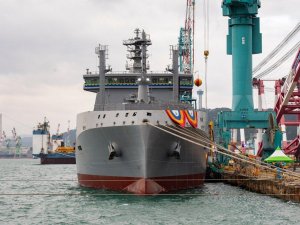 A christening ceremony for the Royal New Zealand Navy's largest vessel took place at the Hyundai Heavy Industries shipyard in the southeastern port city of Ulsan on October 25.

The HMNZS Aotearoa auxiliary ship was constructed at the Hyundai Heavy Industries dry dock under a USD327 million contract. In 2020, it will replace the Navy’s latest replenishment oiler, the HMNZS Endeavour, which was decommissioned in 2017.

At 173m long, the HMNZS Aotearoa is the largest ship the RNZN have ever had in the fleet. The vessel will carry 9,500 tonnes of fuel enough to ‘fill up’ a frigate like the HMNZS TE MANA or TE KAHA 13.87 times. And she’ll be able to carry and operate a RNZAF NH90 helicopter.

She is the first ship to use the Rolls Royce’s Environship design, which includes a new wave-piercing hull for reduced resistance and fuel consumption. Capability features ice-strengthening and ‘winterisation’ for operations in Antarctica. The HMNZS Aotearoa sensors package includes a Farsounder-1000 sonar and SharpEye S and X-Band navigation radars. The two Bergen Main Engines will allow a maximum speed of 16 knots and a range of about 6,400 nm.

Following sea trials, Aotearoa will sail to New Zealand in the second quarter of next year and will be formally commissioned at the Devonport Naval Base.