Ruble's recovery will be short-lived as risks remain 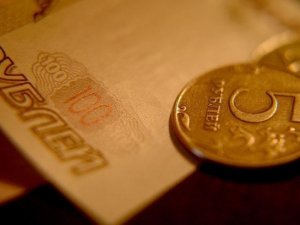 The currency of one of the world’s biggest oil exporters hit a record low of 86 rubles per dollar in mid-January. However, as oil prices recently became higher up to $40 per barrel mark, the ruble also rebounded back to a level of 68 rubles per dollar.

Global oil markets also keeping their hopes high as a meeting between OPEC members and major non-OPEC producers, including Russia, in Qatar on April 17 could result in an agreement to hold oil production at January levels.

“I do not believe in any sustainable impact of OPEC decisions anymore - the market has become too decentralized,” Anton Tabakh, chief economist of RusRating Agency told Anadolu Agency

Another important event in the Russian financial markets last week was the decision of the country’s Central Bank to hold interest rates steady at 11 percent; warning that inflation risks still remain high and the oil price rise could be unsustainable.

“I agree with Russian Central Bank in assessment of an oil price pick up as temporary,” Tabakh said, adding that however a rate cut could be expected after mid 2016 and with the ongoing fiscal pressures in the country, the ruble could reverse its course towards weakening.

After the rate decision, Russia's Central Bank stated that while there was certain stabilization in financial and commodity markets and a slowdown in inflation, nonetheless inflation risks still remained high.

The ruble was also among the currencies in the world, which gained strength against the dollar last week, amid the decision of the U.S. Federal Reserve (Fed) to keep interest rates unchanged.

The currency gained as much as four percent against the dollar last week, trading near 68 levels.

“Although the dovish stance of Fed has provoked a short-lived pick-up in interest towards the foreign exchange markets of emerging countries, apparently, the rally is losing its steam,” said Stanislav Murashov, an analyst at Rosbank in Moscow.

According to Goldman Sachs Group’s statement last week, the final decision of the Fed was one of its "most dovish decisions of the new millennium."

“The risk-friendly environment was damaged by terrorist attacks in Brussels,” Murashov said, emphasizing that the attacks in Brussels on Monday which killed at least 30 people, created losses in most financial markets in the world.

Additionally, despite the dovish stance of Fed, markets were taken aback by the overcautious tone of Fed’s Federal Open Market Committee (FOMC), which decides on monetary policy.

Murashov said that the statements from James Bullard, Fed’s president in St. Louis, Charles Evans, Chicago Fed president and Philadelphia Fed President Patrick Harker, have presented a very hawkish tone on monetary policies after the final rate decision, which also prevented the continuation of the rally of foreign currencies.

Commenting on the Russian Bank’s decision to keep rates unchanged, Murashov said that although the regulator retains a cautious stance on inflation and the economy, easing is not completely taken off the table.

“It could just be delayed for longer in anticipation of further disinflation,” he said, adding that local assets and the ruble may lack local support and remain more driven by the global risk sentiment.

Murashov said that as a result, the ruble would continue to trade in the 69-73 ranges against the dollar with a moderately bearish tilt in the next few weeks.

Another expert, Chris Williamson, Markit's chief economist, pointed out that the outlook for the Russian economy is starting to “brighten.”

Williamson said there were three supporting factors for the ruble at the moment. These include the hope for a production limiting agreement between oil producing countries, secondly the Fed’s dovish outlook, which would mean a looser monetary policy that could eventually support global economic growth, hence demand for oil and finally the Fed’s decision to hold rates.

“Especially as the Bank of Russia shows little enthusiasm to cut rates from the current 11 percent, preferring to maintain an inflation-fighting stance,” he said.

This news is a total 12052 time has been read
Tags: Ruble's recovery will be short-lived as risks remain, Turkish, Maritime