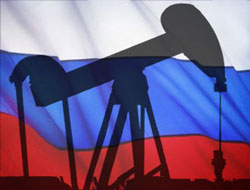 Russia, the world's biggest oil and natural gas exporter, is considering cutting its 2009 forecast for crude to $90 from $95 to account for a faltering global economy.

Russia, the world's biggest oil and natural gas exporter, is considering cutting its 2009 forecast for crude to $90 from $95 to account for a faltering global economy.

''The world's economy is stopping,'' Finance Minister Alexei Kudrin told reporters today in Washington, where world economic leaders are gathering for annual meetings of the International Monetary Fund and World Bank. The U.S., the world's top oil consumer, may see an economic contraction through the second quarter of next year, while Europe may post zero growth, he said.

The Russian government will probably cut its projection for the price of the Urals blend of crude to about $90 a barrel from a previous forecast of $95 for next year, Kudrin said.

Benchmark crude oil prices have plunged by almost half from their record levels in July, threatening to dim the outlook for Russia's economy. The International Monetary Fund forecasts the expansion will slow to 5.5 percent next year from a 7 percent pace this year and 8.1 percent in 2007.

Kudrin forecast Russian growth at about 5.7 percent in 2009, the worst performance since at least 2001, from between 6.5 percent and 7.5 percent in 2008, partly because China is canceling some contracts for imported Russian goods.

Russia favors an emergency meeting of G-8 officials to combat the credit crisis hobbling the outlook for the global economy, Kudrin said. No agreement on when and where such a meeting may be hold has been reached yet, while France may support the idea, he indicated. It will probably take months for the G-8 to ''finalize whole spectrum of measures'' aimed at resolving the crisis, he said.

Russia also calls for the International Monetary Fund to play a bigger role in solving the crisis, Kudrin said. He warned emerging markets will feel the financial crisis at ''full extent.''

Russia plans to lower oil-company taxes by the end of February 2010, ''or even sooner, to mobilize resources for increasing production,'' Kudrin said. He added that the government will also soon allow pension funds to invest in stock markets.

The minister also said inflation will 'insignificantly' exceed the most recent forecast of 11.8 percent for 2008, while price gains will moderate in 2009 because of slowing growth.

The global financial crisis has yet to reach its peak and markets haven't hit bottom, Kudrin said.

Russian officials will next week start talks with Iceland over potential aid of 4 billion euros ($5.4 billion), he said.

Still, Kudrin suggested that the government's consensus is to spend more in the early stages of the crisis.

Russia plans to spend 175 billion rubles ($6.6 billion) of state money over the next few months to buy shares and bonds of domestic companies, Kudrin said. Vnesheconombank, the state development bank, will manage the purchases. Guidelines on what shares and bonds the government aims to buy won't be made public, Kudrin said.

''The market stopped responding to any logic and is led by psychosis.''

The Finance Ministry announced in September that it would lend as much as $44 billion for three months to the nation's biggest banks, including OAO Sberbank, VTB Group and OAO Gazprombank, through a series of auctions starting this week. The government later increased the amount of pledged emergency funds to $186 billion.

Russia's international reserves, the world's third- largest, fell $16.7 billion in the week ended Oct. 3 as the central bank sold currency to prop up the ruble. The reserves fell to $546.1 billion, according to Moscow-based central bank.

This news is a total 1013 time has been read