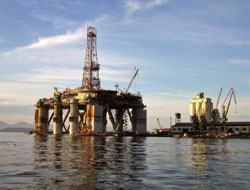 With billions of dollars needed to finance these projects, questions have arisen over how many can materialise.

With billions of dollars needed to finance these projects, questions have arisen over how many can materialise.

In 2008, Russia crystallised expansion plans for its maritime sector to support its offshore gas and oil industries, alleviate congestion and address under-investment at its Soviet-era cargo terminal infrastructure.

But with billions of dollars needed to finance these projects, questions have arisen over how many can materialise.

Russia"s rapidly shrinking economy, as well as the crisis now facing its equities and banking markets, means that the private sector will struggle to raise finance needed.

The Association of Sea Trading Ports estimated in August that $5.8bn was earmarked for private container and ro-ro terminal upgrades at major ports on the Baltic and Black seas over the next three years. That included a greenfield terminal at Ust Luga, scheduled to open in August 2009.

The rapid turnaround in Russia"s economic fortunes means that the government, as well as the private sector, is expected to revise their port and maritime sector modernisation timetable.

So far, government officials have given no hint of any downturn. This month, the port of Primorsk, for example, outlined plans to expand its crude oil annual exporting capacity from 74m tonnes to 120m tonnes by 2010.

Russia"s invasion of Georgia in August focused attention on the Kremlin"s nationalistic resource strategies, highlighted by an unseemly battle for Russian control in the joint venture oil production company TNK-BP. Certainly, crude and oil product exports are expected to be diverted from neighbouring terminals. Plans to build oil products terminals have been announced at Ust Luga and at Murmansk.

This month, Russia cut its crude export duty by a third, in a bid to curtail a further production decline of 2%-3% forecast in 2009. Crude exports on the Transneft pipeline at 3.94m barrels per day were down by about 5% so far this year analysts reported.

Russia is set to enter 2009 with oil production falling, its car market slipping into recession, and reefer trade volumes and container throughput falling. Its brightest light remains government-owned tanker giant Sovcomflot. A corporate restructure is preparing Sovcomflot, worth $5bn, for an eventual listing, possibly in New York or Singapore. But the timing, like all plans to progress Russia"s maritime sector, will depend on the depth and duration of the global recession and the country"s own financial crisis.

This news is a total 1486 time has been read