Russia Planning Sale of Sovcomflot By End of Year 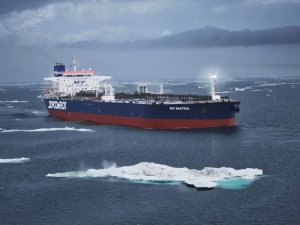 Russia still aims to go ahead this year with the sale of a stake in shipping company Sovcomflot, its economy minister said on Tuesday after the deal was put on hold earlier.

Russia revived a long-running privatization program to boost state revenues and overhaul its corporate management culture after sanctions were imposed over the conflict in Ukraine in 2014. It since then several times postponed deals for state assets rather than sell them cheaply as market conditions deteriorated and the Western sanctions were extended.

Russia had hoped to sell 25 percent of Sovcomflot for 24 billion roubles ($409 million) in May or June but postponed the plan without explanation. In early August, President Donald Trump signed new sanctions aimed at punishing Moscow for alleged meddling in the U.S. election campaign.

The privatization program was “concentrating on the deal with Sovcomflot” for this year, minister Maxim Oreshkin told reporters during a visit to Paris.

.”..We are studying all the opportunities that we have before getting into the deal. We are still looking for the sale of a stake in the company this year.”

First Deputy Prime Minister Igor Shuvalov said at the start of August that Russia was in talks with Asian investors over Sovcomflot, according to news agency RIA.

Speaking after his ministry upgraded its economic outlook for the next three years in forecasts seen by Reuters, Oreshkin said he expected the rouble exchange rate to stay “pretty stable” for the rest of the year as factors affecting it in the first half had faded.

“Those levels we see currently are reasonable,” said Oreshkin, who spoke after a meeting at the French employers’ federation.

According to the forecasts, the ministry sees the rouble averaging 64.83 against the dollar by 2020, compared with 69.48 in the previous set of forecasts released in April.

The rouble was 0.7 percent weaker against the dollar at 58.83 on Tuesday, pressured by tensions over the North Korea.

Oreshkin said his ministry sees no negative shocks from the rouble’s exchange rate for the current account surplus, which “is stabilizing and will remain in a positive area in the autumn and during the fourth quarter.”

This news is a total 739 time has been read
Tags: Russia Planning Sale of Sovcomflot By End of Year