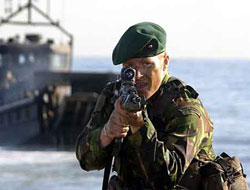 Russia is planning to send more warships to the Somali coast, along with some commandos and a particularly Russian style of counter-piracy operations.

Russia is planning to send more warships to the Somali coast, along with some commandos and a particularly Russian style of counter-piracy operations.

Russia is planning to send more warships to the Somali coast, along with some commandos and a particularly Russian style of counter-piracy operations. In other words, the Russians plan to go old school on the Somali pirates, and use force to rescue ships currently held, and act ruthlessly against real or suspected pirates it encounters at sea. This could cause diplomatic problems with the other nations providing warships for counter-piracy operations off the Somali coast. That's because the current ships have, so far, followed a policy of not attempting rescue operations (lest captive sailors get hurt) and not firing on pirates unless fired on first. Russia believes this approach only encourages the pirates.

Russia is planning on bringing along commandoes from Spetsgruppa Vympel. These are hostage rescue experts, formed two decades ago as a spinoff from the original Russian army Spetsnaz commandos. This came about when various organizations in the Soviet government decided that they could use a few Spetsnaz type troops for their own special needs. Thus in the 1970s and 80s there appeared Spetsnaz clones called Spetsgruppa. The most use of these was Spetsgruppa Alfa (Special Group A), which was established in 1974 to do the same peacetime work as the U.S. Delta Force or British SAS. In other words; anti-terrorist assignments or special raids. It was Spetsgruppa Alfa that was sent to Kabul, Afghanistan, in 1980 to make sure the troublesome Afghan president Amin and his family were eliminated from the scene (killed.) Survivors (members of the presidential palace staff) of the Spetsgruppa Alfa assault reported that the Spetsnaz troopers systematically hunted down and killed their targets with a minimum of fuss. Very professional. The surviving Afghans were suitably impressed. Spetsgruppa Alfa now belongs to the FSB (successor to the KGB) and number about 300 men (and a few women.) At the same time Spetsgruppa Alfa was established, another section of the KGB organized Spetsgruppa Vympel. This group was trained to perform wartime assassination and kidnapping jobs for the KGB. The FSB also inherited Spetsgruppa Vympel, which is a little smaller than Spetsgruppa Alpha and is used mainly for hostage rescue.

Meanwhile, piracy has been a growing problem off the Somali coast for over a decade. The problem now is that there are hundreds of experienced pirates. And these guys have worked out a system that is very lucrative, and not very risky. For most of the past decade, the pirates preyed on foreign fishing boats and the small, often sail powered, cargo boats the move close (within a hundred kilometers) of the shore. During that time, the pirates developed contacts with businessmen in the Persian Gulf who could be used to negotiate (for a percentage) the ransoms with insurance companies and shipping firms. The pirates also mastered the skills needed to put a grappling hook on the railing, 30-40 feet above the water, of a large ship. Doing this at night, and then scrambling aboard, is more dangerous if the ship has lookouts, who can alert sailors trained to deploy high pressure fire hoses against the borders.

Most big ships have small crews

Few big ships carry any weapons, and most have small crews (12-30 sailors). Attacking at night finds most of the crew asleep. Rarely do these ships have any armed security. Ships can post additional lookouts when in areas believed to have pirates. Once pirates (speedboats full of armed men) are spotted, ships can increase speed (a large ship running at full speed, about 40+ kilometers an hour, can outrun most of the current speed boats the pirates have), and have fire hoses ready to be used to repel boarders. The pirates will fire their AK-47 assault rifles and RPG grenade launchers, but the sailors handling the fire hoses will stand back so the gunmen cannot get a direct shot.

Since the pirates take good care of their captives, the anti-piracy efforts cannot risk a high body count, lest they be accused of crimes against humanity, war crimes or simply bad behavior. The pirates have access to hundreds of sea going fishing boats, which can pretend to fish by day, and sneak up on merchant ships at night. The pirates often operate in teams, with one or more fishing boats acting as lookouts, and alerting another boat that a large, apparently unguarded, ship is headed their way. The pirate captain can do a simple calculation to arrange meeting the oncoming merchant vessel in the middle of the night. These fishing boats can carry inflatable boats with large outboard engines. Each of these can carry four or five pirates, their weapons and the grappling hook projectors needed to get the pirates onto the deck of a large ship. These big ships are very automated, and at night the only people on duty will be on the bridge. This is where the pirates go, to seize control of the ship. The rest of the crew is then rounded up. The pirates force the captain to take the ship to an anchorage near some Somali fishing village. There, more gunmen will board, and stand guard over crew and ship until the ransom is paid. Sometimes, part of the crew will be sent ashore, and kept captive there. The captive sailors are basically human shields for the pirates, to afford some protection from commando attacks.

Option of a military operation

There has always been the option of a military operation to capture the seaside towns and villages the pirates operate from. But this would include sinking hundreds of fishing boats and speedboats. Hundreds of civilians would be killed or injured. Unless the coastal areas were occupied (or until local Somalis could maintain law and order), the pirates would soon be back in business. Pacifying Somalia is an unpopular prospect. Given the opprobrium heaped on the U.S. for doing something about Iraq, no one wants to be on the receiving end of that criticism for pacifying Somalia. The world also knows, from over a century of experience, that the Somalis are violent, persistent and unreliable. That's a combination that has made it impossible for the Somalis to even govern themselves. In the past, what is now Somalia has been ruled, by local and foreign rulers, through the use of violent methods that are no longer politically acceptable. But now the world is caught between accepting a "piracy tax" imposed by the Somalis, or going in and pacifying the unruly country and its multitude of bandits, warlords and pirates.

The world will complain, then enjoy the benefits of Russian way

The piracy "tax" is basically a security surcharge on maritime freight movements. It pays for higher insurance premiums (which in turn pay for the pirate ransoms), danger bonuses for crews and the additional expense of all those warships off the Somali coast. Most consumers would hardly notice this surcharge, as it would increase sea freight charges by less than a percent. Already, many ships are going round the southern tip of Africa, and avoiding Somalia and the Suez canal altogether. Ships would still be taken. Indeed, about a third of the ships seized this year had taken precautions, but the pirates still got them. Warships could attempt an embargo of Somalia, not allowing seagoing ships in or our without a warship escort. Suspicious seagoing ships, and even speedboats, could be sunk in port. That would still produce some videos (real or staged, it doesn't matter) of dead civilians, but probably not so many that the anti-piracy force would be indicted as war criminals.
This sort of bad publicity does not bother the Russians as much as it does other European nations and the United States. Russia got lots of bad press for its brutal, but effective, counter-terror operations in Chechnya. Same with last Augusts invasion of Georgia, which was basically a punitive operation, mainly intended to intimidate the Georgian government. That worked too, despite lots of hostile rhetoric from the U.S. and European nations. If the Russians go old school on the Somali pirates, it will probably work. The Somalis are vicious and clever, but not stupid. Somalis and Russians speak the same language of violence, and the Russians carry a bigger stick. The world will complain, then enjoy the benefits of a piracy free Somali coast.

This news is a total 827 time has been read