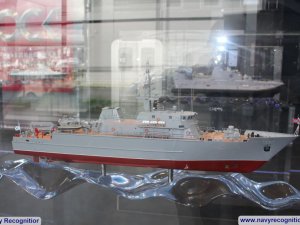 Russia is ready to set up the production of the Project 12701 Alexandrit-E class minesweeper with a fiberglass hull in India under the Make in India program, the press office of Russia’s Federal Service for Military and Technical Cooperation told TASS.

“We are offering our Indian partners to set up the production of aircraft of various types, Project 12701 Alexandrit-E class minesweepers and Project 75I diesel-electric submarines in India under the Make in India program,” the press office said. The ship is designed to provide mine protection of naval bases, coastal sea areas, detect and destroy mines of all kinds, provide, mine protection for ships in transit, exclusive economic zone and mineral deposits at sea, carry out mine reconnaissance, lay minefields. During low mine threat periods, the ships can be used both for protection of a water area and training purposes.

The Alexandrit-E is equipped with a 30mm AK-306 CIWS to protect the ship from air-launched weapon and air assets. Coupled with the OPU-1 electro-optic sights, it can also be used to engage floating mines, coastal targets or even light armored targets. The Alexandrit-E is also equiped with MANPADS and can be equiped with either one 14.5mm machine gun or two 12.7mm machine guns. The Alexandrit-E-class is equipped with mine countermeasures systems, including GKT-2 or GOKT-1 contact sweep, SHAT-U wideband acoustic sweep, hull-mounted sonar, mine destruction system, and LIVADIA-ME mine-detection sonar.

The Alexandrit-E is also equiped with a Inspector-MK2-type MCM unmanned surface vehicle made by ECA Group to inspect and survey underwater objects. The maximum speed of the Project 12701-class countermine vessels is 16kt. The vessel can travel to a range of 1,500nm and stay afloat for approximately 10 days.

According to the press office, active work is currently in progress under the Make in India program to launch the local production of Kamov Ka-226T (NATO reporting name: Hoodlum) helicopters and Kalashnikov AK-203 assault rifles on the Indian territory.

This news is a total 796 time has been read
Tags: Indian Alexandrit-E minesweeper