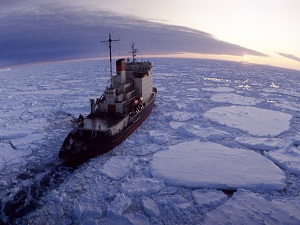 Russia's Ministry of Transport has announced changes to ice navigation criteria for the Northern Sea Route (NSR). New zones with lower ice-class requirements are expected to optimize the placement of icebreakers.

More zones will be added to the seven already defined so that areas of rare ice and clear water are removed from larger zones typically characterized by more ice. The current zoning prevents vessels with weak ice fortifications from entering areas with favorable ice conditions increases cargo delivery time,, reduces the time for geological exploration on the NSR shelf, and violates the rhythm of work of transport vessels in sea ports with year-round navigation such as Sabetta, says the Ministry.

The changes are expected to take effect in May 2019

In the first eight months of 2018, shipping on the route increased by 81 percent. In 2017, the Northern Sea Route Administration issued 662 permissions to vessels for navigation along the NSR, though only 107 of these for foreign-flagged vessels. During that year, about 10 million tons of cargo was shipped to and from Russian Arctic ports and that volume is due to increase to 80 millions by year 2024. This could significantly strain the capacity of the country’s icebreaker fleet.