Russia says US aid is dubious 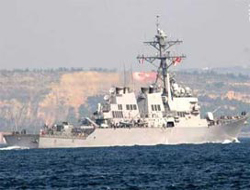 In a move likely to heat up tensions between the United States and Russia over a conflict in the troubled Caucasus, a US Navy warship sailed through the Turkish Straits yesterday to take relief supplies to Georgia.

In a move likely to heat up tensions between the United States and Russia over a conflict in the troubled Caucasus, a US Navy warship sailed through the Turkish Straits yesterday to take relief supplies to Georgia.

The guided missile destroyer USS McFaul passed through the Dardanelles and the Bosporus, and two other ships, the US Coast Guard cutter Dallas and the command ship USS Mount Whitney, will follow in the coming days. "The USS McFaul is under way now, having taken on humanitarian supplies for the people of Georgia," a spokes-man for the US Navy in Europe said.

The two Navy ships and a US Coast Guard cutter are carrying relief supplies, including bottled water, blankets, hygiene kits, baby food, milk and nappies, said Cdr. Scott Miller, spokesman for the US 6th Fleet. He stated that the McFaul and the Dallas were expected to arrive in Georgia next week and the Mount Whitney around the end of the month.

A Polish ship also passed through the Turkish Straits yesterday, but Turkish diplomatic sources emphasized that the ship was headed to the Black Sea to take part in a NATO task mission that sources said had been planned months ago.

Russia, which occupied part of Georgia in response to a Georgian military offensive in the pro-Russia breakaway region of South Ossetia early this month, expressed concern over the US Navy ships' trip to the Black Sea. "From the Russian point of view ? the usefulness of this operation is extremely dubious," Anatoly Nogovitsyn, deputy chief of the Russian military's General Staff was quoted by Reuters as saying when asked about the US Navy mission to deliver aid to Georgia.

The ships are part of a humanitarian mission, but observers say it is also a message of military deterrence by the United States to Russia. The US military had already begun delivering relief supplies by air a week ago.

Turkey, which has close ties with neighboring Georgia and is a key strategic ally of Washington, has been walking a delicate diplomatic line during the Caucasus conflict in order not to antagonize Russia. Ankara, which has developed its trade ties with Russia and relies on imports from Russia to meet its natural gas needs, fears it could be caught in the middle of an undesired, Cold War-type confrontation between Russia and the United States if tensions rise further. Hoping for peaceful resolution of the crisis, Ankara has been floating a proposal for a regional cooperation platform that is planned to include Turkey, Russia, Georgia, Azerbaijan and Armenia.

The US request to send warships to the Black Sea put Ankara in a difficult position as it insists all passages through the Turkish Straits, the only sea outlet to the Black Sea, must be in compliance with the international Montreux Convention.

The US had initially planned to send two Navy hospital ships that each weigh 70,000 tons, far above the maximum weight allowed in the Montreux Convention. Ankara refused, prompting further negotiations with the United States to find a compromise. The three ships now headed to Georgia all meet the standards set by the Montreux Convention.

There were concerns that the US could force Turkey to agree to changes to the convention to be able to give a military message to Russia by sending the two hospital ships. But Matt Bryza, deputy assistant secretary of state for European and Eurasian affairs, said earlier this week that the US had no intention of seeking revisions to the Montreux Convention.

The rising tensions have increased opposition pressure on the government at home. The main opposition Republican People's Party (CHP), which views government efforts to create a Caucasus regional platform to resolve regional crises with suspicion, yesterday formally requested a statement on whether the US ships transiting the Turkish Straits met Montreux standards.

The CHP's Onur Öymen issued a formal inquiry to Foreign Minister Ali Babacan over whether the United States complied with Montreux requirements that all warship transits have to be declared to Turkish authorities eight days in advance.

Foreign Ministry officials state that Ankara has not been forced to compromise, as the three ships meet the requirements stipulated by the Montreux Convention. "As has been the case for around seven decades, we haven't made any exception to the 1936 Montreux Convention, and we will never make such an exception. Turkey is extremely sensitive on this issue," an official told Today's Zaman on Thursday.

The Foreign Ministry yesterday issued a written statement in which it reiterated that foreign-flagged military ships are passing through the Turkish Straits to the Black Sea in line with the notices conveyed to Turkish authorities and in compliance with the Montreux Convention.

"In this context, four ships belonging to the Standing NATO Maritime Group 1 -- Spain (SPS Almirante Don Juan de Borbon), Germany (FGS Luebeck), Poland (ORP General Kazimierz Pulaski) and US (USS Taylor) -- will visit the ports of Constanza in Romania and Varna in Bulgaria in the west Black Sea and our country's ?stanbul ports for training and as part of NATO's planned activities approved in October 2007. Excluding this, passages of other foreign military ships including those of the US are being done in line with the Montreux Convention," the statement said.