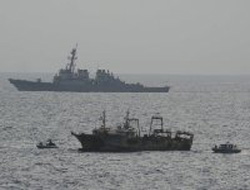 RUSSIA is to dispatch naval vessels to tackle the Somali piracy problem, in a surprise development that may create as many headaches as it solves for merchant shipping.

RUSSIA is to dispatch naval vessels to tackle the Somali piracy problem, in a surprise development that may create as many headaches as it solves for merchant shipping.

The move comes after last week"s statement from a wide range of maritime organisations, demanding that the United Nations take ?real and immedate action? on the issue, including implication by greater use of force.

But the tacit assumption behind the call was that the US-led coalition that already deploys a naval task force in the region - albeit ineffectively in the eyes of many - would take the lead in such a policy.

While it will be difficult formally to condemn the Russian initiative - which draws its legitimacy from a resolution passed at the United Nations Security Council earlier this year, partially at the instigation of the International Maritime Organization - industry sources nevertheless were cautious in their evaluation of the possible consequences.

The main concern in shipping circles seems to be that Russia has expressly stated that it will act independently, rather than co-ordinate anti-piracy efforts with the coalition.

Roger Holt - secretary general of statement signatory Intercargo - commented: ?Obviously the additional resources are welcome at face value, but co-operation has to be co-ordinated throught the UN. That is the only way an effective response can take place.?

A representative of the International Maritime Bureau, the anti-piracy watchdog, added: ?If it"s going to help in the effort to curb piracy, then it"s most certainly welcome. At the same time, it should not jeopardise the efforts of others. The navies should know that each other is going to help out.?

News of the new line from the Kremlin was carried by RIA Novosti yesterday. According to the state-owned news agency, Russian admiral Vladimir Vysotsky said: ?We are planning to participate in international efforts to fight piracy off the Somalia coast, but Russian warships will conduct operations on their own.?

Officially, the reason for the decision is that Russian nationals are frequently among the crews of civilian ships hijacked by Somali pirates. But the real motives appear rather more political than that.

Experts point out that, the USSR had extensive involvement in the Horn of Africa, once sponsoring Somalia as a client state before switching to support the nominally Marxist Ethiopia in the Ethiopia-Somalia war of 1977-78.

But even before the collapse of the Soviet Union, Moscow was too weak to maintain that kind of reach, according to Yuri Fedorov, a specialist on Russian military matters with the Chatham House think tank.
With a transition to more assertive nationalism over the last period, culminating in the recent conflict in Georgia, Moscow may now be sending warships to the region to make a point, he believes.

Professor Fedorov noted: ?Explanation number one is that Russia would like to demonstrate that it has enough political, financial and military resources to allow it to persue an active policy all over the world, and in areas close to the Middle East in particular.

?The second explanation is that Russia would like to demonstrate that it is not only an aggressor but also participates in fighting against piracy and other international problems.?

He ruled out co-ordination with the principle western states in the wake of the fighting in the Caucasus and the current strained relationship between Russia and NATO.

Prof Fedorov believes that Russia is prepared to use fire power against pirates, but only as a last resort, and its naval assets will concentrate on a protective role.

This news is a total 826 time has been read