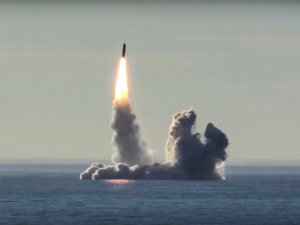 Russia’s military will this week undertake a sweeping drill of its strategic nuclear forces.

It said in a statement Monday that the war games will feature practice launches of missiles.

Maj. Gen. Yevgeny Ilyin, the head of the ministry’s international cooperation department, said at a briefing for foreign military attaches that two intercontinental ballistic missiles will be launched at practice targets on the Kura testing range on the Kamchatka Peninsula.

Russia has expanded the scope of its military drills in recent years amid rising tensions with the West.

This news is a total 216 time has been read
Tags: Russia’s military week 2019