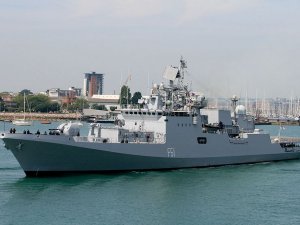 according to the press office of Russia’s Federal Service for Military and Technical Cooperation. The Indian Navy currently has six of these ships.

“In accordance with the existing work schedule agreed by the sides, the Project 11356 frigates currently under construction at the Yantar Shipyard in Kaliningrad will be handed over to the Indian Navy by the end of the first half of 2024,” the service said. Under the program, another two frigates will be built by an Indian shipyard.

According to the press office, the sides have already started to prepare India’s Goa Shipyard Limited for the construction of the ships.

“In order to build the ships, it is necessary to upgrade the Indian shipyard, work out and deliver the required documentation and train Indian specialists, including in the course of the construction of the ships at the Russian shipyard,” the service said.

In November 2018, Russia and India signed contracts for the delivery of four Project 11356 frigates. Under the contract, two frigates will be built in Russia and the other two by the Indian shipyard.

The Project 11356 frigate is designed to attack the enemy’s surface combatants and submarines at short and long ranges and fight aerial threats both independently and within a formation. The frigate is armed with the A-190 100mm gun, air defense missile systems, including the Kalibr-NK (NATO reporting name: SS-N-27 Sizzler) and the Shtil (SA-N-12 Grizzly) complexes, and torpedo tubes. The ship can carry a Kamov Ka-27 (Helix-A) helicopter or its versions.