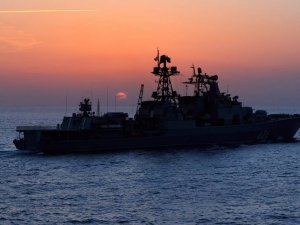 "Yesterday, the ship departed from the Black Sea Fleet’s main base of Sevastopol. In the Black Sea, the Northern Fleet sailors took part in the joint drills of Russia’s Northern and Black Sea Fleets. The Russian sailors will complete their transit of the straits zone (the Bosporus and Dardanelles Straits) tomorrow morning and will continue accomplishing deployment missions in the Mediterranean Sea," the press office said in a statement.

Under its deployment plan, the warship will make a business call at one of the countries in the region.

The large anti-submarine warfare ship Vice-Admiral Kulakov left Severomorsk on December 3, 2019, and made a transit of the Norwegian, North and Mediterranean Seas into the Black Sea in complex weather conditions.

The Russian Navy has been actively employing the Northern Fleet’s large anti-submarine warfare ships in recent years to perform long-distance deployments to the Atlantic Ocean and the Mediterranean Sea and to carry out missions for the exploration of the Arctic.

This news is a total 775 time has been read
Tags: Russian anti-submarine, ship to enter Mediterranean, Black Sea straits