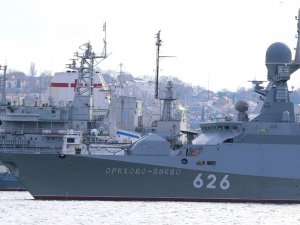 The crew of the missile corvette Orekhovo-Zuyevo and the teams of Bal and Bastion coastal defence systems destroyed a notional enemy’s warship in Black Sea drills, the press office of Russia’s Black Sea Fleet reported on Tuesday.

Under the drills’ scenario, the corvette Orekhovo-Zuyevo detected a notional enemy’s warship, which was capable of delivering missile strikes against the Black Sea Fleet’s infrastructural facilities. During the training exercise, the enemy warship notionally fired cruise missiles towards the coastline. The personnel of the Orekhovo-Zuyevo’s air defence combat posts employed anti-aircraft artillery and intercepted the missiles while the Bal and Bastion combat teams destroyed the notional enemy’s warship. The training battle was held with electronic missile launches.

The Bal coastal defence system with the Kh-35 anti-ship missile is designated to control territorial waters and straits, defend naval bases, other coastal facilities and infrastructure and areas vulnerable to amphibious assaults. The coastal defence missile system is capable of operating in any weather conditions, day and night, with its full autonomous guidance after launches, under an enemy’s intensive fire and jamming.