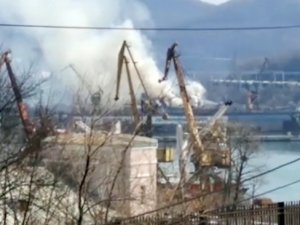 The vessel was under repair and maintenance in Dock No 4 at the shipyard, when fire erupted in galley and cabin 48. The accident was reported to local authorities and the fire departments of the Ministry of Emergency Situations were summoned. All the workers were evacuated and accounted without reported injuries. Four firefighting brigade started firefighting, being supported by employees from the shipyard. The fire was localized, but ship is heavily smoked. The deck and bulkheads are poured with water and cooled, but fire is not yet extinguished.

The local authorities initiated investigation for the root cause of the accident. According to preliminary information, the fire erupted after welding works. Fortunately there are no injured people and no reported water pollution, reported Rosmorrechflot.

This news is a total 806 time has been read
Tags: Russian fish factory vessel Gutsul caught fire in Nakhodka shipyard