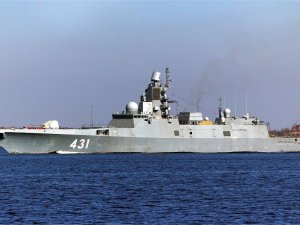 The Russian Navy Admiral Kasatonov frigate of project 22350 sailed out from Severomorsk to the Barents Sea to continue trials, the Russian Defense Ministry said. The frigate earlier tested missile arms in the White Sea.

The crew fired Kalibr cruise missile at a coastal target in Chizha range in Arkhangelsk region, as well as Kalibr and Onix missiles at sea targets.

"The radar armaments will be checked by the flights of various aircraft of the Northern fleet over the warship. The work to check systems and mechanisms in various regimes will continue," it said.

The Admiral Kasatonov began trials on November 20. They comprise several stages. After the acceptance trials are completed, the frigate will join the Navy. It is to operate in the Northern fleet.

In October, the frigate sailed from the Baltic to the White Sea to complete running and acceptance trials. In early December it sailed from Severodvinsk to Severomorsk.

The Admiral Flota Kasatonov is a frigate of the Russian Navy, and the second ship of the Admiral Gorshkov class. The frigate was laid down in Northern Wharf Shipyard in Saint Petersburg on 26 November 2009 and launched in December 2014.

The Admiral Gorshkov class is equipped with a 16-cell Vertical Launch System (VLS) for a mix of Kalibr-NK land-attack cruise missiles (range 2 500 km), P-800 Oniks anti-ship missiles that have a range of 300 to500 km and 91RTE2 anti-submarine missiles.

The main gun of the ship includes a 130 mm A-192M cannon. It has a rate of fire of 45 rounds per minute. It can be used to engage surface targets, as well as to bombard land. Other weapon systems consist of two Palash Close-In Weapon Systems (CIWS), mounted at the rear. These defense systems are fitted with 30 mm rapid-firing Gatling guns and 8 short-range surface-to-air missiles each. Also there are two pedestal-mounted 14.5 mm heavy machine guns.

This news is a total 1033 time has been read
Tags: frigate continues trials in Barents Sea, Admiral Kasatonov, Russian Navy