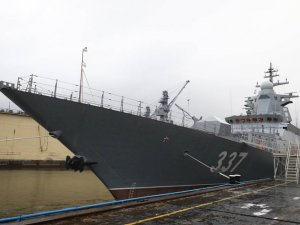 The Project 20385 lead corvette Gremyashchiy armed with Kalibr cruise missiles has entered the White Sea for state trials, the press office of the Northern Fleet reported on Friday.

"For several days, the corvette’s crew will check the ship’s systems and mechanisms at sea and test radio-technical armament with the help of the Northern Fleet’s aviation. Besides, the corvette will test-fire its main missile system against various types of targets," the press office said in a statement.

The Gremyashchiy is the Project 20385 lead corvette laid down at the Severnaya Shipyard on February 1, 2012, and floated out in June 2017. The corvettes of this Project developed by the Almaz Central Marine Design Bureau are designated to detect and destroy enemy submarines and surface ships, provide for troop landing and cope with numerous green-water tasks.

Project 20385 corvettes displace 2,200 tonnes, have an operating range of 3,500 miles and their sea endurance is 15 days. They are armed with Kalibr-NK universal missile systems, Redut anti-aircraft missile complexes and Paket anti-submarine warfare technology.

Project 20385 differs from its predecessor by greater dimensions and displacement. They have a steel hull and composite superstructure, with a bulbous bow and nine watertight subdivisions. Compared with the Soobrazitelny, Boikiy, Sovershennyy and Stoikiy ships, which are fitted with Redut air defence VLS system of 12 launchers on the bow, these new ships are equipped with a UKSK VLS system comprising eight launchers for either Kalibr, Oniks or Zircon anti-ship/cruise missiles. The Redut VLS system with 16 launchers has been placed on the stern. Another difference is the lack of the aft mast above the helicopter hangar and single integrated mainmast that no longer includes separate open shelves for artillery and navigation radars.