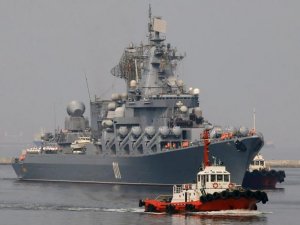 Sources close to the Russian military said on Thursday that Russian naval forces in the Black Sea had been put on heightened alert to discourage Ukraine from trying to disrupt the soccer World Cup as the tournament got under way.

However, the Defence Ministry itself dismissed the reports, saying in a statement: “The forces of the Black Sea Fleet are working in routine mode. No measures to put (them) on high combat alert have taken place.”

Reuters was not able to verify a Ukrainian build-up independently, and there was no confirmation of that from officials in Kiev.

One of the military sources said there were concerns that Ukraine was building up its military presence in the area as a “provocation” during the tournament.

Three sources said Russia’s forces around the Black Sea Crimea peninsula had been put on a state of high combat readiness. Two of them said it was linked to the tournament.

“Because of the World Cup and expectations of possible provocations by Ukraine around the Crimean coast, commanders took the decision to increase the fleet’s level of military preparedness,” said one of the sources, who spoke on condition of anonymity because he is not authorized to speak to the media about operational plans.

SHIPS AND AIRCRAFT
The sources said the mobilization involved deploying extra vessels to the Azov Sea, an arm of the Black Sea where Russia and Ukraine share the coastline, and naval aircraft flying extra sorties. Naval and coastguard units were involved.

“There is a concern that Ukraine could organize a provocation during the World Cup,” said a source in the navy’s aviation arm who also spoke on condition of anonymity.

“For that reason, we need a concentration of forces in the Azov Sea that will discourage thoughts of trespassing in (Russian) territorial waters.”

The third source, in the naval coastguard, said the state of heightened readiness would remain in place until July 31, about two weeks after the World Cup concludes.

The Ukrainian navy and the office of Ukrainian National Security Council Secretary Oleksandr Turchynov did not comment on the alleged Russian deployments.

Asked if Ukraine was planning provocations, Turchynov’s office said in a statement: “Regardless of the moaning of scared Russian mercenaries and the threats of the Russian president, the Ukrainian military will act in a way appropriate to the threats.”

Russia and Ukraine have been in a military standoff since early 2014, when Moscow annexed Crimea from Ukraine and armed pro-Moscow separatists seized control of eastern Ukraine.

Russian President Vladimir Putin has said the World Cup is an opportunity for Russia and Western countries to put politics to one side and focus on sport.

This news is a total 668 time has been read
Tags: Russian Navy Put On High Alert