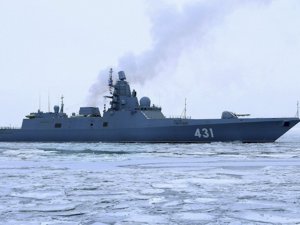 The Admiral Kasatonov first serial frigate of project 22350 trained elements of running trials in the White Sea and interacted with aviation, the Defense Ministry said.

This week, fighter jets Su-24 were engaged in the training along with helicopters type Ka-27 and Ka-31 of the Northern fleet. Helicopters made several landings and takeoffs from the ship," it said.

The frigate began running trials on November 20. They will be held in several stages. The warship will test technical mechanisms and hold fire at ranges in the White Sea. The frigate was laid in 2009 and floated in December 2014. It is to join the Navy later this year.

The «Admiral Kasatonov» will be the second new frigate that is included in the Northern Fleet in a few months. In July 2018, the «Admiral Gorshkov» was officially handed over to the naval force.

Frigates of project 22350 are designated to fight submarines and warships in oceans and seas and to repel air attacks both independently and within formations. The hull of the frigates is flush-decked. It has a three-island superstructure, one mast-turret and one steel funnel. Stealth technologies were used in the construction to make the warship practically invisible for the radars of the potential adversary. The displacement is close to 4450 tons, the length is 135 meters. Diesel gas-turbine power plant has a capacity of 65000 horsepower.

The warship is armed with a new 130mm artillery gun A-192, anti-ship, anti-submarine and anti-aircraft missiles, including Kalibr and Poliment-Redut. It can carry a Ka-27 helicopter or its modifications.

This news is a total 750 time has been read
Tags: Russian Navy's Admiral Kasatonov frigate trains with aviation in White Sea