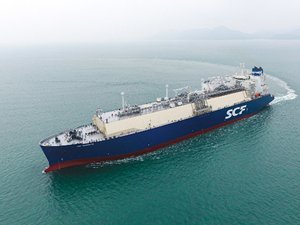 “SCF Group and Shell have enjoyed a long-standing partnership, which both parties seek to consistently expand and reinforce,” said Mr Tonkovidov. “For many years, Shell remains among the largest charterers of SCF’s vessels,” he noted.

Like the first in the series, SCF La Perouse delivered in February 2020, SCF Barents is designed to maximise its energy efficiency and meet the most stringent environmental standards. This is the result SCF’s ‘Green Funnel’ initiative, said Mr Tonkovidov, noting that effort was launched in 2015 “to introduce cleaner-burning LNG fuel for large-capacity tankers.”

Each LNG carrier is equipped with an advanced GTT Mark III Flex cargo containment system, WinGD’s Otto-cycle, low-pressure dual-fuel X-DF engine, and a system that reduces NOx emissions while the vessel sails in liquid fuel mode. Additionally, all vessels in the series are among the first globally to feature a boil-off gas (BOG) partial reliquefaction system, which significantly reduces cargo losses while on long voyages or awaiting cargo operations.

With the delivery of SCF Barents, SCF now has 15 gas carriers in operation, with another 16 on order or under construction.

This news is a total 3139 time has been read
Tags: Russian newbuild LNG carrier goes on charter to Shell