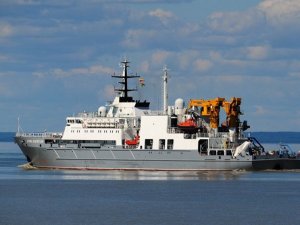 The Northern fleet will get a modern rescue vessel capable of assisting submarines at a major depth. It is the second vessel of project 21300S. It carries deep-water craft, rescue robots and drones.

The vessel is vital, as the number of submarines increases in the Arctic and underwater research is on the rise, the Izvestia daily writes.

Russian Defense Ministry sources said the Navy decided to arm the Northern fleet with a rescue vessel of project 21300S. The time of construction and other contract terms will be specified according to the parameters of the arms procurement order in the coming years.

It will be the second vessel of the series. The Igor Belousov lead ship was laid in 2005 and floated in 2012. It operates in the Pacific fleet. It was reported that the arms program for 2018-2027 stipulates the construction of four vessels, however, no work was reported.

The Igor Belousov rescue vessel is unprecedented in the world by its capabilities. It can evacuate the crew of a distressed submarine, supply air, electricity and rescue means to it. Manned and unmanned underwater craft can search for and inspect the shipwreck.

The vessel operates deep-water GVK-450 diving craft which can submerge to 450 meters and rescue submariners to the surface. It has decompression chambers for 60 men.

GVK-450 was tested in the spring of 2017 and submerged to 120 meters. In October of the same year, it submerged to 317 meters and divers went out to the seabed of the Pacific fleet range. In the autumn of 2018, three divers hoisted a Russian flag at a depth of 416 meters in the Sea of Japan. It was a record submergence in the outfit. The divers also trained connecting air ducts to a conditionally distressed submarine. GVK-450 comprises five decompression chambers, a diving bell and Bester-1 deep-water craft capable of operating at a depth of 720 meters.

The Northern fleet has been receiving new submarines of late and needs rescue craft, former Navy Chief-of-Staff Admiral Valentin Selivanov said. "In the case of a major accident, they will be in charge of rescuing the submariners. Naturally, they cannot operate at major oceanic depths of several kilometers. But they can save a distressed submarine in coastal waters. There are no major depths in the Barents Sea. Such a rescue vessel is necessary there. A modern vessel could have rescued the submariners of the Kursk from the stern compartment. The depth allowed doing it. Such vessels are necessary for all Russian fleets," he said.

The Russian Navy operates three vessels to rescue submarines, expert Dmitry Boltenkov said. Besides the Igor Belousov, the Pacific fleet also operates the Soviet-built Alagez ship. The Black Sea fleet has the Epron. "They carry modern equipment. Divers on the Igor Belousov can operate at a depth of 450 meters. Such experts can be counted on the fingers of one hand in the world," he said.

The issue of creating rescue vessels for distressed submarines on the seabed or water surface was raised after the sinking of the Kursk submarine in August 2000. The contract for the first vessel was signed in 2004. The construction dragged because of numerous innovations. The vessel joined the Navy in 2015.

The Navy is radically changing assistance to distressed submarines. Now all possible means are engaged, not only rescue vessels. Antisubmarine ships, minesweepers and countersubversion boats will be engaged in the search for missing submarines from this year. The new method was tested in 2019 at Northern fleet drills, the Izvestia said.