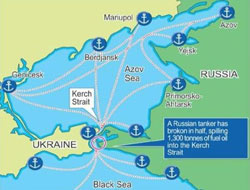 A severe storm broke a Russian oil tanker in two between the Azov and Black Seas on Sunday, spilling fuel oil in what a Russian official said was an "environmental disaster."

A severe storm broke a Russian oil tanker in two between the Azov and Black Seas on Sunday, spilling fuel oil in what a Russian official said was an "environmental disaster."

But Emergencies Ministry spokesman Viktor Beltsov told Reuters not more than 1,200 tonnes had leaked into the sea.

Thirteen crew members were drifting aboard the ship's stern and several other ships were also in trouble in the Kerch strait, a busy waterway running between the Azov and Black Seas.

Efforts to reach them were hampered by the storm, which was gaining force.

"The wind is now blowing in the direction of Ukraine's coast, so it is our common problem," Oleg Mitvol, deputy head of Russia's environment agency Rosprirodnadzor told Vesti-24.

"This problem may take a few years to solve. Fuel oil is a heavy substance and it is now sinking to the seabed," he said.

"This is a very serious environmental disaster."

The tanker, Volganeft-139, was on its way from the port of Azov in the southern Russian region of Rostov to Kerch in Ukraine's eastern Crimea when high waves broke its hull at around 0445 (8:45 p.m. Saturday EST) on Sunday, Russian media reported.

The tanker, designed primarily for rivers and in service since 1978, was carrying 4,000 tonnes of fuel oil in total, officials were quoted by media as saying.

The likely effects of the spill were not immediately clear. A spill over 700 tonnes is considered large, but the biggest ones run into the tens or even hundreds of thousands.

Almost at the same time as the Volganeft-139 broke up, a freighter carrying 2,000 tonnes of sulphur sank in the same storm, off the port of Kavkaz overlooking the Kerch Strait from the Russian side.

Its crew of nine had been rescued after drifting in a raft for a few hours. "Sulphur is a very inert chemical, and we hope that in the water it will not form any substances dangerous to humans," Mitvol said.

Several hours later, another freighter carrying sulphur sank off Kavkaz, Interfax news agency quoted the port administration as saying, adding three of its crew had been rescued by a Ukrainian ship. The fate of the other eight was unclear.

The hull of another oil tanker, Volganeft-123, cracked after being hit by high waves. Maxim Stepanenko, Novorossiisk transport prosecutor, told Russian television this tanker was afloat and its oil products were not leaking.

"All the captains in the strait were warned about the storm at 1715 (9:15 a.m. Saturday EST) on November 10," Stepanenko said. "All of them had enough time to leave the dangerous area."

A Georgian freighter and a Turkish one were also stranded off the nearby Russian Black Sea port of Novorossiisk, RIA news agency quoted port chief Vladimir Yerygin as saying. Both crews were safe, he said.

A Russian oil tanker split in two during a fierce storm early Sunday, spilling at least 2,000 metric tons (560,000 gallons) of fuel into a strait leading to the Black Sea in one of the worst environmental disasters in the region in years, authorities said.

Two freighters carrying sulfur also sank nearbyin the Strait of Kerch, a narrow strait linking the Black Sea and the smaller Sea of Azov to the northeast, said Sergei Petrov, a spokesman for the regional branch of Russia's Emergency Situations Ministry.

Rescuers saved all crew members from one of the freighters but eight sailors from another vessel were missing. The tanker's 13 crew members were rescued, emergency authorities said.

«There is serious concern that the spill will continue,» Oleg Mitvol, head of the state environmental safety watchdog Rosprorodnadzor said on Vesti 24 television.
He said it would take «several years» to clean up the spill.

Two barges loaded with fuel oil also ran aground in the area but there was no leak, Petrov told The Associated Press. A Turkish freighter, Ziya Kos, also ran aground, he said.

Vesti 24 also reported the sinking of a Russian freighter carrying metal near the port of Sevastopol on Ukraine's Crimean Peninsula. Two members of its 16-man crew drowned and one was missing, it said.
Maxim Stepanenko, a regional prosecutor, told Vesti 24 that captains had been warned Saturday about the stormy conditions. He said the oil tanker _ designed during Soviet times to transport oil on rivers _ was not built to withstand a fierce storm.

He said a similar tanker battered by storm developed a crack in its hull but hasn't yet leaked any oil.
Mitvol said while the spilled sulfur did not present an environmental danger, the two freighters could also leak fuel oil from their tanks, adding to the pollution.

However, Sergei Baranovsky, president of the Green Cross environmental group, said sulfur could be potentially even more dangerous to the area's habitat than the fuel oil, RIA Novosti news agency reported.
The Black Sea is bordered by Russia, Turkey, Romania, Bulgaria, Ukraine and Georgia. 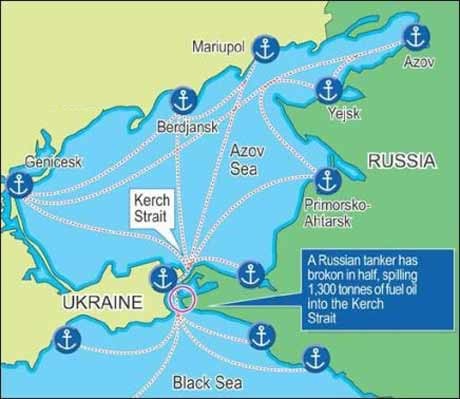